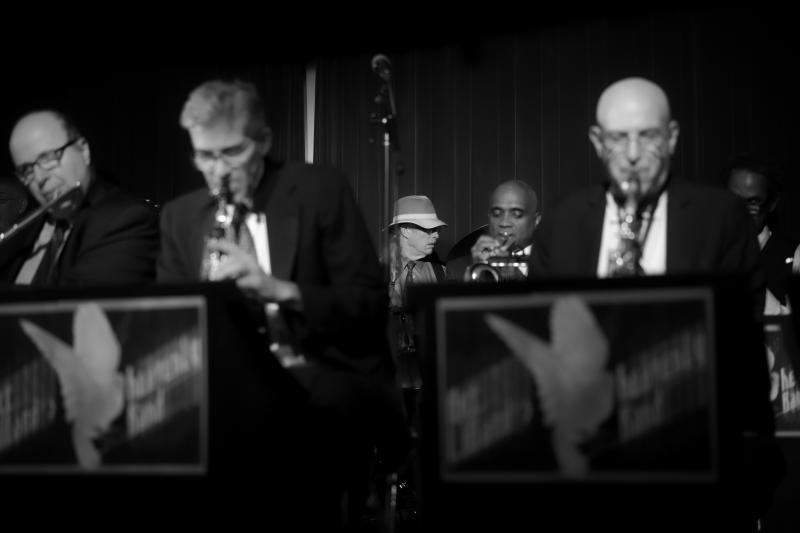 In this teetering age in which we live, where one wrong move might tip an edge too far in one direction, drummer/composer Art Lillard and his "Heavenly Big Band" stand firmly toward the center, finding balance in more than just a solid groove or memorable lick. Rather, Lillard understands that sharing music needn't be political, fiercely philosophical, or abstract, and proves that bringing a little positivity out into the open is nevertheless a formidable task, as attested by the obvious dedication flowing in the veins of his musicians.

All of this was on full display in an intimate concert put on at the New York City Baha'i Center, where Lillard and his crew danced through a decalogue of standards and originals. On the latter front, Lillard peppered the set list with a variety of personal expressions: the slick old-school energy of "Brooke's Dream Gift" (a delightful showpiece that fronted tenorist Boris Kurganov), the uplifting "Happy Blues" (with a punchy solo from trumpeter James Smith), and the band's theme song, "Heavenly," the luscious groove of which gets me every time.

Other highlights on the instrumental front included the Kent Glenn tune "Brushese," which sailed through its changes behind closed eyes, marking time by chromatic exchanges between flutist Lou Caputo, altoist Frank Perowsky, and guitarist Andrew Baird. Matthew Gee's "Oh Gee" was another memorable turn, especially for an expository solo by trombonist James Borowski.

The evening's most enjoyable portions, however, were to be found in the handful of songs performed by vocalist Andrea Wolper, whose straightforward touch brought needed lift to such tried-and-true favorites as "Slow Boat to China," "The Girl from Ipanema," and "The Lady is a Tramp." With plenty of sunshine to spare, she and the band bounced their way from one gem to another, leaving a glittering trail in their wake. Most memorable was their take on "Just Friends," which in a uniquely downtempo arrangement breathed with fresh emotional impact. Along the way, the band gave up a wealth of fabulous solos, most notably in the flute playing of Carol Sudhalter amid the romping humor of "Fried Bananas."

In terms of style, presentation, and creativity, Lillard is a class act in the truest sense of the term, one who lives up to his first name with ease. And if you're ever in New York City and have a chance to catch him in any context, be sure to pack an extra smile. You're going to need it.