James Borowski is one of the newest and most exciting bass trombonists on the New York music scene.

One of only a handful of bass trombonists worldwide who improvise jazz, James's innovative musical ability is redefining the instrument and its role. His sound, technique and energy have served to open the public's eyes to the bass trombone as not only an ensemble stalwart, but as a solo instrument as well.

A big band specialist as well, James has taken the stage with premier acts including Michael Feinstein, Frank Sinatra, Jr. and Johnny Mathis. James has also played with the orchestras of Tommy Dorsey, Jimmy Dorsey, Nelson Riddle, and Gene Krupa and toured for several years with the World-Famous Glenn Miller Orchestra.

Borowski’s experience is not solely limited to big band work. As a student of classical bass trombone, he spent eight years as the principal bass trombonist in the Princeton Brass Band. James’s talents have also brought him into pit orchestras on Broadway as well as to the stage with the New Haven Symphony Orchestra.

James is also a scholar of the bass trombone, holding a Doctorate from the Mason Gross School of the Arts at Rutgers University and has studied music education at Youngstown State University as well. As a clinician, Dr. Borowski's presentations benefit from his wealth of experience as a performer combined with his knowledge of education and musical development.

As a composer, he is finding new way to use the bass trombone and bringing these new ideas to the forefront of music. Through composition and arranging, James is bringing his unique conception of the instrument to the ears of the public. His repertoire includes solo pieces for bass trombone, big band arrangements (some of which are in the Birdland Big Band's library!) and small jazz ensemble compositions, these last being the launching point for a recording project in the near future. 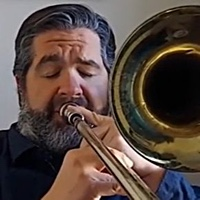 All About Jazz musician pages are maintained by musicians, publicists and trusted members like you. Interested? Tell us why you would like to improve the James Borowski musician page.