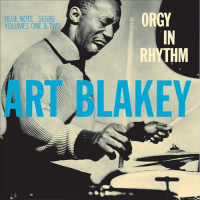 This may be the strangest album ever released on Blue Note Records, and I don't like it.

I hate saying that.

I love music, and I try to find something to like in everything. I try occasionally to go beyond the familiar. Opera baffles me, but I can't deny there are some beautiful melodies and powerful arias. Country music is cornball to my ears, but I do love me some Johnny Cash. And what is bluegrass but country jazz?

I knew going in that this 1957 recording would be alien turf. It's a tough listen. Yes, this is Art Blakey, but there are no Jazz Messengers here, and precious little jazz. It's drumming, drumming and more drumming, and not even the conventional kind. If you like African chants, wood flutes, poly-rhythms and every variety of odd banging, this record is for you.

Granted, it's not all pounding. One track of the eight, "Come Out and Meet Me Tonight," is a child-like ditty with actual singing and English words. It starts with a cute little flute melody, two choruses of what can only be described as a silly nursery rhyme, then lots of drums, some piano vamping, and back to the ditty. It's the only melody on the whole album.

The closing number, "Abdallah's Delight," starts as conventional bop, with nice flute and piano solos, then abruptly switches to all drums. It's 10 minutes total, only 3 of which are anything like familiar jazz.

Everything else is unexpected. Even after several listens, it never felt satisfying.

I'm sorry. I know there is an audience for this unusual record. It's just not me.

Rating: 2 stars (out of 5)—Maybe more if you really like drums