Have the Jazz Messengers ever recorded a catchier, more soulful song than “Moanin’”? 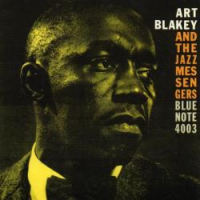 Jazz fans will argue forever over the best version of The Jazz Messengers. Was it the group with Wayne Shorter and Lee Morgan that made A Night in Tunisia in 1960? The 1954 edition with Horace Silver, Clifford Brown and Lou Donaldson that made A Night at Birdland? (Which isn't technically a Jazz Messengers album, but really it is.) Or maybe the 1980s version with Wynton Marsalis and Branford Marsalis?

Here's an argument for the lineup that made arguably the best single LP of all: The 1958 combo that included Lee Morgan on trumpet, Benny Golson on tenor and Bobby Timmons on piano. The album, technically, is named simply Art Blakey and the Jazz Messengers. But you and I know it better as Moanin'.

(Much like The Beatles' famous 1968 album is technically named The Beatles, but no one calls it that. We know it as The White Album.)

Have the Jazz Messengers ever recorded a catchier, more soulful song than "Moanin'"? I don't think so. Here it is, in all its colorful, nine-minute glory—the original plus an alternate take. This is, quite simply, a delicious piece. Lee Morgan never sounded bolder and bluesier. Timmons, who wrote the song, is spot on. And Golson is catching fire.

And that's just the opening cut.

The third great number, also by Golson, is "Blues March." As the title implies, this is bop with a martial beat, though not at all like John Philip Sousa. A very original idea—totally unexpected and full of pleasure.

The rest of Moanin' is standard Jazz Messengers stuff. Plain vanilla bop on "Are You Real?" Slow and sophisticated on "Along Came Betty." And the Arlen-Mercer ballad "Come Rain or Come Shine," played more upbeat and happy than you'd expect.

This is a record to savor, and arguably the best ever recorded by Art Blakey. Buy it.

Rating: 5 stars (out of 5) Availability: Many copies on Amazon, new and used Cost: Just $3 used