By Samuel Chell
September 18, 2007
Sign in to view read count 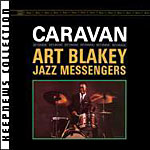 Given the limited activity of Art Blakey's Jazz Messengers for the Riverside label, Caravan is a somewhat curious early entry in the string of remasters making up the Keepnews Collection. Even avid collectors of the band's recordings tend to lose interest when the "invisible member"—recording engineer Rudy Van Gelder—isn't on hand to place his unmistakable stamp on their overall sound. All the same, the audio quality no less than the personnel and the music on this studio session support Keepnews' decision to reissue the date.

A 1962 session with Blakey's highly regarded frontline of tenor saxophonist Wayne Shorter, trumpeter Freddie Hubbard, and trombonist Curtis Fuller along with pianist Cedar Walton, Caravan was made with virtually the same cast (bassist Reggie Workman had replaced Jymie Merritt) as Buhaina's Delight (Blue Note, 1961). A comparison of the two closely-spaced dates reveals as much about the labels' different approaches to the art of recording as it does about the musical evolution of this edition of the Messengers.

Far from a transparent documentation of the source, the Blue Note sound is nothing if it's not distinctive—to the point of immediate recognizability. Compared to other recorded representations of acoustic music, the wind instruments and drums seem to eat up the microphones while sounding reverb-enhanced; Blakey's drum kit sounds fuller, his thunderous press rolls capable of momentarily upstaging the horn players, his hi-hat as prominent as a relentless jack hammer; the sound of the piano is definitive at all times but at a cost to overtones and frequencies from the instrument's cabinetry and placement in the room. In short, Van Gelder's approach is unashamedly proactive, bringing the action right into the listener's wheelhouse while underscoring in bold the enunciations of each player.

The Riverside session, engineered by Ray Fowler and remastered by Joe Tarentino, is a fascinating contrast, apart from any judgments about the effectiveness and validity of either approach. Blakey's ride cymbal is more "treblish," the hi-hat less prominent, occasionally even disappearing in the sheer flow that sweeps up all six members; the instruments, most notably the piano, sound closer to verisimilitude; the ensemble sound is less focused than Van Gelder's carefully composed canvas; the drums in turn are cut down by a size or two (though it's doubtful Blakey's vocalizations during his solos have ever been more faithfully documented). In short, the recording technique factors in the effect of physical context and ambient sound; rather than construct a sound and bring it into the listener's space, the engineering constructs a soundscape inviting the listener's attendance.

Not surprisingly, the musical highlight of this eponymous session is the Duke Ellington/Juan Tizol title tune. After a building mosaic of three separate motifs by drums, horns and piano, Hubbard charges out of the blocks with all the abandon and drama of his immediate predecessor, Lee Morgan, setting up Shorter, who matches the trumpeter's intensity for the first half of his John Coltrane-inspired solo. Soon Blakey's percussion is bristling with energy but is in uncharacteristically quiet, simmering overdrive, his sonic presence less heard than felt beneath the solo statements and collective improvising of the three principals. When it's the drummer's turn to solo, the sound of the cymbals is widely dispersed rather than confined to a single mic and channel, Blakey's guttural utterances summoning up the image of a suddenly aroused and irate troll sicking sibilant Furies upon the caravan that would dare disturb its domain.

The program continues with a Shorter waltz, "Sweet 'n' Sour" (two takes, both employing electronic fade-outs), followed by his tastefully voiced, dynamically contoured "This Is For Albert" (a performance well suited to Riverside's backed-off microphones). There are also two well-executed takes of Hubbard's intricate "Thermo," both with wide-sweeping sforzandos that, once again, acquire added drama because of the deferential microphones. The customary ballad trumpet feature on this outing is Hoagy Carmichael's "Skylark," first burnished to a radiant glow, then spiffed to a bright shine by Hubbard, while Fuller's solo on "The Wee Small Hours" is some of his most melodic work on record, framed nicely by a restrained complementary sentiment from Walton on piano.

Many Blakey followers insist that the drummer's ensembles of the early 1960s were his most consistent if not his best. Collectors whose listening has been limited to the outstanding Blue Note recordings have reason to look forward to hearing the group play once again. Even listeners familiar with this session's 1991 reissue, which suffered from exaggerated separation of the stereo channels among other questionable production decisions, should be pleasantly surprised. It may be the same line-up, but it's definitely not the same game.