BY JEFF DAYTON-JOHNSON
April 10, 2007
Sign in to view read count 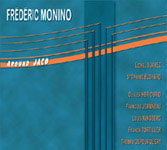 There are at least three potential pitfalls to such a project. The first is that Monino as a bassist might suffer in comparison to the daunting virtuosity of the object of his homage. Second, such tributes risk being excessively reverential (and consequently sounding wooden). The third risk is that Pastorius—whose absence is much regretted, but whose legacy is only beginning to be assessed—is not up to the tribute.

Monino succeeds on all three counts. As a bassist, he discreetly avoids center stage (aside from the intro to "Punk Jazz"). A supple solo on "Liberty City" and his substitution of the bass for the frenetic, coked-up strings on the original "Speak Like a Child/Kuru" provide subtle evidence of Monino's prowess.

The difference between Pastorius' fabled 1962 fretless Fender bass and Monino's five-string Leduc U- bass is very much like the difference between the originals and the versions on this record. The first sounds subtly sharper, more metallic; the second, slightly warmer, more acoustic.

Indeed, the instrumentation of this record's basic group—electric bass, accordion, drums—hews a slightly playful middle road between irreverence and punctilio, avoiding any deadening solemnity, but also avoiding radical reconfiguration of the material. The basic trio is complemented by an impressive cast of guests, effectively deployed—above all, Olivier Ker Ourio's harmonica on "Continuum" and a couple of other cuts; Louis Winsberg's ersatz sitar guitar on "Used to be a Chacha"; Thomas Depourquery's alto sax on an elegiac "Three Views of a Secret" (not forgetting François Jeanneau's always-appreciated soprano sax on two numbers).

Monino's fresh but essentially faithful approach to the Pastorius material demonstrates that the third of the possible pitfalls mentioned above is avoided: Pastorius the musician amply deserves such a tribute. In case you needed to know, the spare re- readings reveal "Continuum" and "Three Views of a Secret" to be beautiful jazz compositions. "Punk Jazz" and "Liberty City," swinging steadily, sound like they could be compositions from the '40s or '50s as easily as the '70s or '80s. "Used to be a Chacha," meanwhile, sounds even more decidedly like fusion than the '70s original.

Monino thus uncovers a kind of a timelessness in Pastorius' compositions and playing. Evidence of great achievement on the part of the late bassist, it is no small achievement for Monino.