Jamal is a classically trained prodigy from Pittsburgh who combined his knowledge of the European and American classical traditions to stir up his own distinctive jazz voice. He drew from the flash, dazzle, speed and suppleness of touch of Art Tatum and Erroll Garner, and dialed those influences down to shape his sound into a more spacious and elegant affair. He hit it big early with At The Pershing: But Not For Me (Argo, 1958), an album that stayed on the Ten Best Selling Album Charts for more than a hundred weeks. It was a rare feat of popularity for a jazz album, then and now. In some quarters the album earned Jamal's artistry the tag "cocktail music." This was not meant as a compliment. Time has proven the author of that flippant labeling a fool. Jamal enjoyed a 60-plus-year, often-awarded career. He recorded more than 60 albums between 1951 and 2019, the year of his retirement. A bad, or even average album cannot be found in the bunch. Most are outstanding. 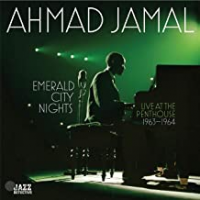 
On the first double CD set, recorded in Seattle, as the title tells us, in 1963 and 1964, Jamal was not far away from his breakout, the previously-mentioned At the Pershing: But Not For Me. And not much had changed. Ahmad Jamal was consistent—the 10 tunes on the two discs are Great American Songbook tunes with some originals mixed in—some George Gershwin, some Cole Porter, a few contributions from the trio's bassist Richard Evans, along with a Jamal original. As always with Jamal, there is a sense of polish and grace to the proceedings. And a well-designed and sometimes constrained, sometimes ebullient playfulness. Jamal's touch could go from whisper-soft to near-bombastic in an eyeblink—and he and the trio were always in complete control, making the prettiest piano trio music imaginable. 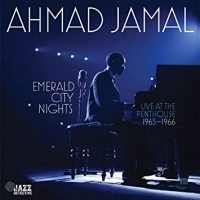 
Jamal's trio changed slightly from the '63-'64 group, with Chuck Lampkin, who appears on the 1963-64 set, joined by Frank Gant and Vernel Fournier as the drummers on the three different dates that comprise this release. The sound carries on with the typical Jamal-ian exquisiteness—the smooth rhythmic flow, the crystalline piano touch, a practiced refinement of articulation. The set closes with a pair of Jamal's most famous tunes, "Poinciana" followed by "Whisper Not," both of which were featured on Keith Jarrett's Whisper Not (ECM, 1999), telling us that Jarrett may have spun an Ahmad Jamal album or two in his day. Everybody should. These two Emerald City Nights sets are a good place to start—piano trio music of the classiest, most accomplished kind—and if the Penthouse is actually a warm and cozy, low-ceiling ground-floor venue, the recordings have the feel of high ceilings, the men in tuxedos, the women in heels and flowing gowns, pearls around their necks gleaming under sparkling chandeliers. A class act all the way.

And: The packaging: first rate, as is everything Zev Feldman produces. Sturdy, glossy tri-fold casings with gorgeous cover shots and voluminous and informative liner notes. Zev Feldman—in terms of the music and the physical product—does not mess around.

Tracks: CD 1: Johnny One Note; Minor Adjustments; All Of You; Squatty Roo. CD 2: Bogata; Lollipops And Roses; Tangerine; Keep On Keeping On; Minor Moods; But Not For Me.

Tracks: CD 1: I Didn't Know What Time It Was; Who Can I Turn To?; My First Love Song; Feeling Good. CD 2: Concern; Like Someone In Love; Invitation; Poinciana; Whisper Not.