BY JOHN KELMAN
December 3, 2009
Sign in to view read count 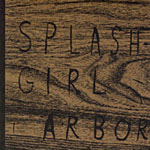 The same core trio is back. Pianist Andreas Stensland Løwe, bassist Jo Berger Myhre, and drummer Andreas Lønmo Knudsrød all play in a number of groups showcased each year at the opening Punkt Elope mini-fest, which Løwe produces to bring attention to a vibrant young scene of Norwegian artists covering a wide swath of territory and stylistic cross-pollination. Doors. Keys. focused on piano, bass, and drums, with the addition of saxophone, bass clarinet, and violin enhancing the its chamber ambiance; Arbor expands Splashgirl's sonic palette with guitars, zithers, kantele, glockenspiel, percussion, synthesizers, and electronics.

Unlike Doors. Keys., the majority of the music is collaborative, most importantly Arbor's two lengthiest tracks: "Nature, as in bits, parts and pieces"; and the closing title track. Both traverse considerable cinematic audioscapes despite an overriding serenity. Beginning with a simple, chime-like melody, Knudsrø's mallet-driven drums and a single percussive tremolo, it's only when Løwe introduces spacious, melancholic yet strangely majestic piano voicings that "Nature" evolves into a deceptively static-sounding mesh of sustained, harp-like zither and kantele, layered piano and synth, and gently probing bass notes: minimalism without the pulse. More expansive electronic textures imbue "Arbor," but what's most definitive about it—and the entire album—is Splashgirl's deep attention to dynamics and detail. The slightest emergent harmonic or (e)bowed acoustic guitar string triggers music heavily reliant on the power of decay and carefully articulated nuance. Development is so gradual as to be nearly imperceptible, yet where "Arbor" begins and ends are ultimately two very different places.

Three composed pieces augment the collective improvisations: Passage's string-driven "He took us out to see the sun" a folkloric centerpiece that effectively divides Arbor in half; and two gentle pieces from Løwe. The pianist's ethereal "Hemlock" references both Eno's Music for Airports (Virgin/Astralwerks, 1980) and the tintinnabulism of Estonian classical composer Arvo Pärt's "Für Alina," while the quietly anthemic "Postludum," featuring Sørås' mournful pedal steel, builds inevitably; Arbor at its most powerful yet, in the end, a piece of uncanny tranquility.

The Norwegian scene continues to be intrepidly forward-thinking, with Splashgirl proving the vast potential of seemingly small ideas. Demonstrating significant growth, Arbor is a simply remarkable album where the slightest gradation speaks with great profundity.