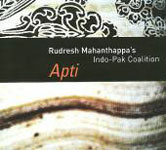 The story has been told before. While still in college, Indian-American saxophonist Rudresh Mahanthappa was given a CD of Kadri Gopalnath's Saxophone Indian Style as a joke by his older brother. But Mahanthappa was impressed by Gopalnath's ability to translate the microtonal intricacies of South Indian Carnatic music to the saxophone, which eventually resulted in their highly praised collaboration, Kinsmen (Pi Recordings, 2008).

Despite early critical acclaim obtained alongside pianist Vijay Iyer, as an Indian-American Mahanthappa felt pressured to represent his cultural identity in a jazz context, resulting in a short-lived cross-over ensemble in the mid-1990s. Years later, fully versed in the complexities of South Indian music traditions, Mahanthappa has delved back into this fertile world with his stripped down Indo-Pak Coalition, featuring guitarist Rez Abbasi and tabla virtuoso Dan Weiss.

The structures of the tunes are expansive and dynamic, fluidly vacillating in tempo, tone and mood. Spacious and animated, they range from the regal opener "Looking Out, Looking In" to the ebullient title track. The former opens the album like an invocation, with Mahanthappa's yearning microtonal glisses gliding between intervals, supported by Abbasi's ethereal accompaniment. The labyrinthine title track modulates in tempo, as syncopated cross-rhythms fuel soulful declarations from each member of the trio. "Adana" and "Palika Market" follow suit, exuding lyrical drama and breathtaking contrapuntal interaction.

Saving the best for last, Mahanthappa and Abbasi careen through thorny harmonic detours as Weiss modulates time signatures on "IIT," a folksy Western melody bolstered by vibrant Eastern cross-rhythms. But nothing is as striking as the closing "You Talk Too Much." A bracing run through the changes, Mahanthappa's blistering cadences and Abbasi's percolating fretwork combine the precision of Indian classical music and traditional be bop with quicksilver virtuosity.

The trio's spectacular interplay and seamless integration of Indian melodies, harmonies and rhythms into a jazz context make this an excellent companion piece to Kinsmen, and a cross-cultural fusion like no other. Numerous attempts at Indo-Jazz Fusions have been made in the past, but few have been as authoritative as Apti.