BY BUDD KOPMAN
November 6, 2006
Sign in to view read count 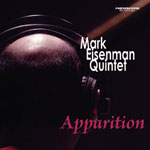 Mark Eisenman is new to me, and I was surprised by this record. Eisenman, though born in New York City, has been based in Toronto since 1972, and has clearly positioned himself, quite proudly, on the conservative side of the jazz spectrum.

What this means, especially with respect to Apparition, is that Eisenman's heart belongs to the golden age of jazz which was dominated by the Blue Note sound: the hard bop era. It also means, as he makes clear on his website, that the only way to be truly creative is to be true to yourself and not try to put out what you think other people want. In this case, he seems to be addressing the "different for differences sake" that might be considered an infection these days.

However, this issue leads directly to the question of the creative versus the imitative jazz musician, which has been around since the efforts of Wynton Marsalis and the so-called "young lions," starting in the eighties. Eisenman is no young lion, and Apparition is one of the most honest recordings you will find, not just from the pianist's point of view, but also from the rest of the band: saxophonist Pat LaBarbera, flugelhornist John MacLeod, bassist Steve Wallace and drummer John Sumner. This music is so in the pocket that you just have to smile and go with it. This kind of playing can only come from the inside, after having spent decades listening and playing. Your foot may just start tapping, your head may rhythmically nod, and your fingers may snap on the two and four.

Eisenman says in the notes that "the titles to the compositions offer clues as to what my inspiration was for the tunes." Even if you cannot identify each and every tune's antecedent, as Phil Schapp might, the feel of the album will be unmistakable to anyone who has spent even a little time listening to the Blue Note (or Mosaic, for that matter) catalogue.

For those who would ask, "Why bother doing this?" (admittedly myself included at first), the answer will be clear as day by the end of the album: these men truly love this music and very much want to communicate that love to others, and they make that point with every single note they play.