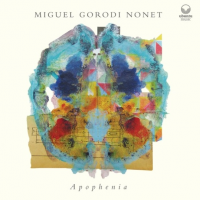 As a youngster, Miguel Gorodi led something of a nomadic existence. He was born in Spain in 1990 but was then raised in Saudi Arabia and Thailand before moving to England in 2006. In his mid-teens he won a scholarship to study music at Wells Cathedral School and two years later received a place at London's Guildhall School of Music and Drama to study trumpet. He graduated from there in 2012 with a first class honours degree but stayed on for a further two years having been awarded a fellowship in the Jazz department. Initially recruited by vocalist Ian Shaw to play on his album The Abbey Road Sessions (Splash Point Records, 2011), Gorodi has been a sideman and soloist at sessions throughout Europe including, Scandinavia and Russia. Gorodi is now an in-demand trumpeter and a member of the Barry Green Sextet, SEED Ensemble and the London City Big Band. He also plays regularly with the prestigious London Jazz Orchestra.

Apophenia (erroneously making connections or meaning with unrelated things) is Gorodi's debut album and his nonet features some of the U.K.'s brightest rising stars. The pervasive serialism to the opening of "La Nausée" is accompanied by disconcerting oscillation in intensity and pitch—a nod to Sartre's "Nausea"—but settles down with Gorodi taking the first effusive solo. Gorodi's juxtaposition of tuba and vibes as heard on "Time Sigmund" is redolent of arrangements by George Russell or Mike Gibbs. Conor Chaplin makes his presence known here with a resonant double bass solo as does Gareth Lockrane on lithe flute. On "Search" Ralph Wylde's vibes begin to channel Gary Burton at his most contemplative. But this rumination is washed away by the angular "Amygdala" (an area of the brain responsible for emotions) over which Lockrane's flute presides. "Soma" benefits from a taut ensemble arrangement, whilst on "Fifths" Gorodi displays his magnificently fluid soloing technique.

Dave Hamblett's punchy drums introduce the tune Nicest Memo," the concluding number in this set and, in common with all the compositions on the album, the tune presents a full tonal spectrum thanks to the cogent deployment of a variety of instrumentation within the nonet. Produced by vibraphonist of note Jim Hart, the final mix manages to showcase all the musicians equally, and more importantly so they can all be heard in a clear and distinct balance, even within the ensemble final crescendo. Apophenia represents a highly significant milestone in what promises to be a stellar career for this talented trumpeter and composer.