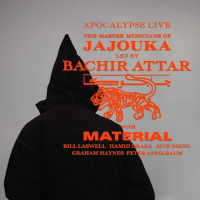 This is another entry for M.O.D.'s new download-only Digital Incunabula series, which concentrates on live recordings from the Bill Laswell vaults. Here's a Jajouka/Material set from 2015's Gent Jazz Festival in Belgium, a performance actually witnessed by your scribe. The five-piece Jajouka Sufi trance contingent (from the eponymous mountain village in Morocco) are led by Bachir Attar, a longtime collaborator with Western experimenters, mostly as a consequence of his work with producer and bassist Laswell.

The Jajouka introduce their ghaita double reed-pipes and percussion, moving at a fast clip, making a repetitive accumulation of buzzing and clattering, until Material's Aiyb Dieng and Hamid Drake bring in their own percussion, immediately increasing the heavy momentum. It's heads-down for the full surge, as the first three tracks allow ample time for establishing a subjective hypno-terrain, being around 20 minutes apiece. Seven minutes into "Dancing From The Heart," Laswell delivers his first bass payload, with Peter Apfelbaum jumping in straight after with a tenor saxophone repeat. The entire ensemble peaks and then makes a brief cut, heightening the drama before continuing onwards. Around half way, Laswell shifts character to dub reggae, slightly distorted, and hesitant, until the players discover this fresh direction. Sometimes the dawning of a new Laswell bass line can be unsettling, as if the Material man is in human shuffle mode.

"The Bird's Prayer" has a lighter, aerial feel, dominated by trilling flute, before finding an Ornette Coleman/Prime Time theme to incorporate, led by cornetist Graham Haynes. The cohesion becomes deeper as the music progresses, Haynes and Apfelbaum starting up a Memphis Horns-styled repeating blast, pumped full of dub echo. "The New And The Ancient" also opens with spaciousness, but it's not long before Laswell deals another persistent riff, and the ghaitas re-enter. The shortest track (relatively, at seven minutes) is "HLallia," an encore offering, and consequently more condensed, building rapidly up to its explosive potential.

Apocalypse Live: Dancing From The Heart; The Bird’s Prayer; The New And The Ancient; HLallia.

About The Master Musicians Of Jajouka & Material