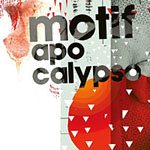 When you have a winning combination, it's best not to mess with it. When guitarist Pat Metheny hooked up with Brad Mehldau, the pianist's trio was already such a strong, flexible unit that Metheny grabbed it in its entirety for his two-CD project. While the order of events may not be quite the same, Atomic pianist Håvard Wiik and his trio, responsible for the fresh, modernistic The Arcades (Jazzland, 2007), form the core of Motif, a group of young players who've been on the Norwegian scene since 1999. Apo Calypso is Motif's Jazzland debut, and it's a remarkable combination of powerful writing, simpatico free play, and stylistic cross-pollination that's become a defining characteristic of the intrepid, free-thinking Norwegian scene.

Bassist Ole Morten Vågan and drummer Håkon Mjåset Johansen are fast becoming a rhythm section of choice, also working together with Danish-born/Norwegian-resident pianist Maria Kannegaard on the cerebral yet highly evocative Maryland (Moserobie, 2008). Trumpeter Mathias Eick is a new fixture on ECM, working with guitarist Jacob Young, pianist/harpist Iro Haarla and drummer Manu Katché, in addition to releasing his own masterful debut, The Door (ECM, 2008). Saxophonist/clarinetist Atle Nymo may be the least visible of the quintet, but he's racked up some serious accomplishments, including work with Metheny at Molde Jazz 2001.

Together on Apo Calypso, Motif explores quirky, post-'60s Miles Davis swing on the opening "Jump Start," where Eick's purer jazz chops are in full force, and the fiery title track, where Wiik's unfettered solo of reckless abandon is bolstered by Vågan and Johansen's frighteningly empathic support, a tumultuous rough and tumble ride through incredible technique aimed at consistently musical ends.

"Miss Landmine" explores darker territory, opening with a lengthy arco solo from Vågan that leads to a chamber-like bass/clarinet/trumpet trio more rooted in contemporary classical references. Wiik's gradually intensifying solo, peppered with cued unison lines and occasional improvised responses from Eick and Nymo, is again supported by Vågan and Johansen, again building to a climax, but this time fading to a brooding clarinet/bass duet that, once again, leads to a scored recapitulation. "Battle Lost" is another classically informed piece, exploring the potential of a repeated pattern over a gradually increasing tempo. Nymo's bass clarinet solo—moving inexorably from rich, deep melody to high pitched screams—is the kind of "eureka" moment that should gain him the credibility he deserves.

As exploratory as Motif can be, it's also capable of profound lyricism. "Dia De Los Muertos" begins as a rubato tone poem, but its gorgeous changes ultimately emerge, another feature for Wiik that builds inevitably (as do all his solos), but with a strong regard for melodic construction.

With every member of Motif a star, it's further evidence of the vibrancy of the Norwegian jazz scene and its proclivity for twisting tradition every which way. Amongst a bevy of compelling releases, Apo Calypso stands as one of the best releases to come out of Norway in 2008.