Home » Jazz Articles » The Fictive Five: Anything Is Possible 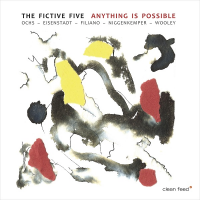 The music of Larry Ochs's The Fictive Five's Anything Is Possible reminds one of a Rubik's cube, with every twist and turn encouraging more twists and turns, promising a resolution that seems just beyond reach. Ochs and his bandmates use an incredible diversity of sound ranges, rhythms, tones, and electronic effects to fashion their abstractions. At times the music suggests hot red volcanic lava crashing upward against a dark night sky. But these crashes are not purely random. Instead they utilize an architecture reminiscent of The Art Ensemble of Chicago, moving from simple root structures to complex layers of sounds in linear, non-linear, and sometimes circular progressions.

One interesting feature of the Fictive Five is the use of two bass players. Ken Filiano and Pascal Niggenkemper keep busy throughout the sound collages, alternating between bowing and plucking and both contribute audio effects like fog horns, insect chirps, or rabbits scurrying through grass. The bassists are grounded by drummer Harris Eisenstadt's contributions, and his poly-rhythmic impulses and approach to the trap set bring to mind Tony Oxley.

The front section has Ochs offering up muscular, adventuresome, and rambunctious playing, and he elicits this diversity of sounds from both the tenor and the sopranino saxophones. Ochs is joined by trumpeter Nate Wooley, who—with his mouthpiece gyrations and tones that leap like dolphins from the ocean— sounds like the late Lester Bowie reborn.

Ochs wrote three of the numbers. One is dedicated to filmmaker Spike Lee, and another, a sad lament to the late, beautiful Cecil Taylor. The group together composed the remaining two numbers, and one of these is dedicated to the late American filmmaker Warren Sonbert. The music, like the work of its subjects, is experimental in form, and challenges all preconceived notions of swing, bop or any other type of "beat." There are times where the phrases seem to accelerate like a runaway roller coaster. There are other times when the music has a bluesy, drunk and staggering feel. There are dragonfly twitters and butterfly flutters.

For those seeking a musical journey, Anything Is Possible will certainly reward. And like any great journey, Ochs and his crew venture forth, always asking "What lies beyond the next curve or next moment of time?"