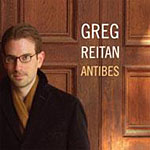 Greg Reitan began the year with Some Other Time (Sunnyside, 2009), a spectacularly graceful record. He ends the year with another that equals—if not surpasses—the maturity of that album. Antibes is a work of exacting pianism and expansive grandeur. The record also dispels the notion that Reitan's music is an amalgam of his influences (Bill Evans and Keith Jarrett), for Reitan is a singular pianist with a technique becoming of a virtuoso of the highest order.

His control over expression and dynamics is sublime. His fingers make for a sinewy touch, but also one that is completely in control of the sound he wishes to extract from each note. Reitan may lightly tap a note, in either the treble or bass clefs, or if he's emphasizing a part of a phrase, the stress may vary from soberly firm to heavy or whiplashed. It is all to get the most appropriate meaning from the music.

"Antibes" and "Salinas" are two cases in point. Both describe landscapes beloved by the pianist, but the song emerges depending on the emotion of his relationship to the surroundings. In "Antibes," it is a fine sense of lithe beauty and sweeping vistas, thus the pianist is delicate and Byzantine in his almost detailed description of scenic wonders. In "Salinas," Reitan's pianistic strokes are bolder and firmer, deliberately repetitive and rounded, emboldened by a certain sense of the broad rolling landscape. During his accompaniment of bassist Jack Daro's solo on "Salinas," every note is played with magnificent deliberation, making a case for Reitan's unique technique. The pianist employs exacting pressure, with both his wrists and fingers, to each note; even though he might play a G7 twice in the same motif, the feeling and emotion of each note is subtly altered to gain a different effect each time.

On Antibes, Reitan also emerges as a fine composer. His music can be acutely sensitive. "Waltz for Meredith," is charged with myriad and heartfelt emotions, and "One Step Ahead" is stimulating and challenging, gently nudging at John Coltrane "Giant Steps." "Late Summer Variations" is positively lustrous. "September" is frail. And, of course, "Antibes" and "Salinas" are epic and painterly.

Just as he is willing to take chances as a writer, Reitan the interpreter of song strikes out boldly beyond the safe confines of exacting melody. In "Time Remembers One Time Once," he channels Debussy through Denny Zeitlin. "Fall" shows a deep understanding of Wayne Shorter. "Sympathy" casts a respectful glance at Jarrett.

In reinterpreting "In The Wee Small Hours Of The Morning," Reitan makes a spectacular leap, slowing down the tempo of the song to a hypnotic swirl. It is this piece that best defines Reitan's technique throughout this remarkable record, a technique that utilizes every muscle and nerve of the body to express the dynamism of music.

Antibes; For Heaven's Sake; Waltz for Meredith; One Step Ahead; Fall; Time Remembers One Time Once; Sympathy; September; Re: Person I Knew; Late Summer Variations; Salinas; In The Wee Small Hours Of The Morning.