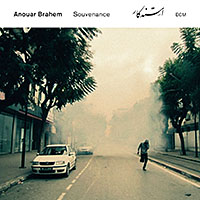 If we are, in the final analysis, the sum total of our experiences, then it stands to reason that the work of musicians (and other artists) is a reflection of the events that touch their lives. Souvenance means "recollection," and if there is not, as oudist Anouar Brahem claims, "a direct link between my compositions and the events taking place in Tunisia," then there's little doubt that the album's cover image—taken by Nacer Talef in the Tunisian capital of Tunis in January, 2011, showing man who appears to be running from an explosion and the wall of dust and debris rushing towards him—suggests, as Brahem also states, that he has, indeed, "been deeply affected" by the Tunisian (or Jasmine) Revolution that began in December, 2010 and resulted in the ousting of longtime president Zine El Abidine Ben Ali a month later.

But if such an upheaval might suggest music of explosive turbulence, it would seem that Brahem has instead chosen to create a suite of music that reflects the sadness...even the the despair...but, ultimately, the hope that such an event might realize for a better future.

Bringing bass clarinetist Klaus Gesing and electric bassist Björn Meyer back from his stellar The Astounding Eyes of Rita (the oudist's last album, released by ECM nearly six years ago) together with pianist Francois Couturier, from the oudist's sublime Le Pas du Chat Noir trio last heard on Le Voyage du Sahar (ECM, 2006), Brahem has created a quartet with his broadest palette since Khomsa (ECM, 1995) for Souvenance...a palette made all the larger with inclusion of the 18-piece string ensemble, Orchestra della Svizzera italiana, conducted by Pietro Miantini.

While the majority of Souvenance's eleven-track, ninety-minute duration consists of new Brahem compositions (arranged for Orchestra della Svizzera italiana by the oudist and Johannes Berauer), a closing reprisal of Khomsa's "Nouvelle vague" draws a direct line between the two recordings—though in this case Tõnu Kõrvits' arrangement emphasizes the soft confluence of Orchestra della Svizzera italiana's strings rather than the repetitive piano figure that Couturier contributed to the original, which represented his first recorded encounter with Brahem.

Brahem's music demands much from himself and his fellow musicians; not in an overly virtuosic fashion, but more in the congregation to create a sound so soft, so subtly ornate that it is often less the sound of multiple instruments coming together but is, instead, about conjoining where, with tremendous concentration, each player takes his/her place in a more seamless unification.

That's not to say there aren't moments where individuality shines through; with players this exceptional it would be impossible for there not to be some feature time. Gesing takes a solo of visceral specificity before setting the stage for an equally impressive turn from Brahem on "Deliverance," one of Souvenance's more boldly dramatic pieces for the quartet alone, following "Ashen Sky." Another piece without strings, "Ashen Sky" demonstrates Brahem's marvelous ability to utilize the broadest possible dynamics to tremendous effect. Couturier seamlessly melds with the oudist as Gesing moves from breathy low register support to soaring upper range melodies.

The opening of the title track is defined by harmonic stasis, with Couturier featured over a glistening wash of strings further bolstered by Gesing—so buried in the mix that he's felt more than heard—but when Brahem's profound melody emerges, only to lead to a double time second half, "Souvenance" evolves into a potent feature for Brahem and Meyer that is one of the record's many high points.

But with a book of music where form and freedom are not always easy to delineate—and the line between interpreting and adhering more strictly to form is even fuzzier—this is music that, in its largely hypnotic way, redefines how improvising musicians can interact with strings (or, perhaps, other orchestral timbres). This is also music whose bolder dramaturgy may be delivered with such attention to detail and dynamics that the slightest movement can become something more intrinsically powerful...and spiritual.

Because, at the end of the day, that's what Souvenance truly represents: a spiritual narrative that explores the depths of emotion and the furthest reaches of the human condition...in the most understated yet clarified way possible. Brahem may take more time between recordings these days, but when the result is as moving as Souvenance, it's clearly worth the wait as the years melt away and the music makes all other concerns irrelevant.

Music may not, for Brahem, be directly tied to personal experience but it's unequivocally informed by it. The turmoil that took place in Brahem's home since his last record may be impossible to fathom for those who live where such occurrences happen rarely, if at all. But with a masterful narrative like Souvenance, it's an opportunity for everyone to experience the emotional impact...and look, hopefully, towards the kind of shared understanding that's all too rare...but all too necessary...in an increasingly turbulent and intolerant world.