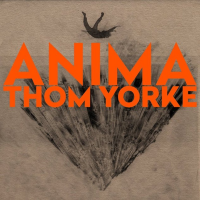 Radiohead's Thom Yorke has done it again—made another album that perfectly captures the alienation, hostility and isolation of this space in time. As the music on Yorke's ANIMA makes clear, the ability to stay optimistic about the future of any number of things—the human race, civilization, institutions, personal relationships—is likely a lost art. Instead, what remains is a dark and disturbing dystopia, an Orwellian nightmare of the first (and last) order where emotions are relegated to emoji and life is viewed from the dark lens of a consumer (parasite).

Cowritten by Yorke and his producer, Nigel Godrich, ANIMA also serves as a soundtrack for a short film directed by Paul Thomas Anderson (which is available on Netflix). In his third solo effort, Yorke gives voice to the plight of modern life. His lyric on "Last I Heard (...He Was Circling the Drain)" expresses his angst:

Yorke uses his normal assortment of electronic effects to back his wispy vocals and falsetto. It is a voice that sounds like an angel in mental anguish. The music is comprised of rhythms which echo like heartbeats of fear or anxiety while orchestral sounds sway over layered sound collages. Listening to the music, one feels at times as though one is dreaming in a loop, experiencing vertigo, falling. But through it all, there's a sense of overwhelming beauty—a craft that Yorke has perfected over the course of his career.

Yes, Yorke's music expresses horror, not unlike yawning at the news of the Texas-sized plastic garbage patch in the Pacific Ocean that contaminates all life with cancerous byproducts or shrugging when hearing that radioactive water from the damaged reactors at Fukushima continues to drain directly into the Pacific Ocean six years after the earthquake. Take this lyric from "(Ladies & Gentlemen, Thank You for Coming)":

For those not afraid to confront their innermost darkness, to breath the stench of human society and consequences of this day and age, ANIMA is a reminder that the artist feels for us all.

Traffic; Last I Heard (...He Was Circling the Drain); Twist; Dawn Chorus; I Am a Very Rude Person; Not The News; The Axe; Impossible Knots; Runwayaway; “(Ladies & Gentlemen, Thank You for Coming).