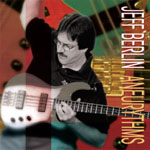 He's only released a handful of albums under his own name over the past thirty years, but bassist Jeff Berlin remains a singularly distinctive electric bassist. That he's chosen to spend as much time as an educator at the self-started Players School of Music in Florida as he has performing and recording just means that he's as big a believer in nurturing others as he is in self-promotion. Still, with chops to burn, an instantly recognizable tone and encyclopedic musical knowledge, it's a mystery why he's not better known outside fusion and progressive rock circles.

Aneurythms could be considered a fusion record, but that would be selling it short. Not that there's anything wrong with fusion, but Berlin demonstrates a much broader reach. The record has no shortage of virtuoso playing from Berlin, but it's a more democratic effort than Lumpy Jazz (M.A.J., 2004), where the bassist was almost always front and center. Here pianist Richard Drexler (back from Lumpy Jazz), keyboardist Otmaro Ruiz and guitarist Gannin Arnold get plenty of space, while producer Brian Bromberg occasionally anchors the proceedings on acoustic bass, leaving Berlin free to play a more dominant role.

The music ranges from the up-tempo funk of "Porky & Beans" which, with its lengthy and idiosyncratic head, could easily have fit into the Bruford repertoire of the mid-to-late 1970s, to the more lyrical and Midwestern vibe of "Copland." "Ars Longa Vita Brevis" is a piece of modernized classical counterpoint, while "Miss Management" mines Latin territory and demonstrates Berlin's comfort at navigating more jazz-centric changes.

Berlin's dense but appealing tone works throughout, whether it's up front or holding down the groove with drummer Vinnie Colaiuta. "Justibofidus" is a fiery fusion burner that features Arnold—a guitarist whose general association with smooth jazz artists belies an unexpected energy and facility. His solos reference Scott Henderson but he's no mere clone. Given that anyone familiar with Berlin will not be surprised by the bassist's fine work here, Arnold is the real surprise of Aneurythms—a guitarist from whom more, we can hope, will be heard.

"A Mark You Remade" references the famous Weather Report tune "A Remark You Made" and bassist Jaco Pastorius' innate melodism, but it's tribute, not imitation. "Don't Be Happy! Worry!" manages to swing and be funky at the same time, and is another showcase for Berlin's remarkable ability to wind his way through more complicated constructs.

Lumpy Jazz was an album that you had to love bass to enjoy. While there's no shortage of bottom end dominance on Aneurythms, its greater equity means it will appeal to a broader audience—and not just fusion fans. Berlin is a player/writer who comfortably straddles the line between more raucously energetic and gentler, more elegant music that, with a wider frame of reference, proves you can please all of the people all of the time.