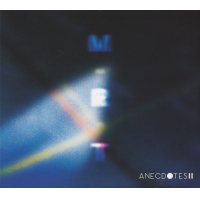 The opener "Snow Part 1" strongly evokes memories of the open strings of John McLaughlin's guitar on the Miles Davis timeless classic In A Silent Way. Benedict Wood's lithe guitar work continues on "Many Roads Travelled" here displaying dexterity in the soloing, whereas on "Surprise Flight" Wood shows he can evince a melodic structure with chords as well as single notes, on this, his own composition. So whilst this is Matthew Read's own trio, and his bass playing is undoubtedly virtuosic—as evidenced by the sublime pizzicato introduction to "Burford Brown"—Wood unquestionably plays a vital rôle.

Anecdotes II follows hot on the heels of Read's 2016 debut album Anecdotes and plays in much the same vein. Whilst Wood's playing emulates to some extent that of guitar maestro Bill Frisell, every musician has their own signature sound and this guitarist is no copyist. "In Motian" is another fine example of the trio's uniqueness with Wood underplaying with a restrained yet effective obligato line whilst Arthur Newell pursues a complex set of fills. "K," a composition imagining a team-up of Kurt Rosenwinkel and Kenrick Lamar, sees Wood resume a feistier approach compared with the more lyrical, faintly bop-inflected "Revolutions." The book-ended title of the closer "Snow Parts 1 & 2" offers more characteristic chiming guitar and the tight rhythm section underpins a haunting melody line.

Read met his two compatriots whilst they were all studying jazz at London's Guildhall School of Music and Drama and their natural musical compatibility is immediately evident. Gaining a first class honours degree in jazz from the Guildhall, Read subsequently won the prestigious Dankworth Prize for Big Band composition and arranging in 2016. The crucial thing about this trio is that whilst they play as a totally integrated unit, they also impart a novel sound but which doesn't eschew wistful melodies, subtle chord changes and individually engaging performances. This is definitely a trio on which to keep a sharp eye.