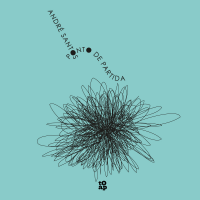 There is something wonderful about watching a talented musician make the leap to bandleader and composer on record for the first time. Possibilities have yet to be closed off, the inspiration simply to showcase a personal take on the music they love, the budget not even contemplating high concepts, lavish orchestras, or if you're Rick Wakeman ice skaters. Lisbon resident, Madeira born, guitarist Andre Santos released this energising debut collection, the appropriately titled Ponto de Partida (or 'starting point') in December 2013, having shown a maturity beyond his 27 years to refrain from recording until he was sure that both the material & the musicians were ready.

You can hear the love of the bossa nova that Santos grew up listening to in the gorgeous tribute to both Joao Gilberto and his own grandfather "Avo Joa" ('Grandfather Joao'). The piece features a wonderful, lyrical, tenor solo from guest Gianni Gagliardi and the earworm of a theme lingers in the mind long after the CD has been returned to its sleeve. Whether even the real Copacabana beach could surpass the mental image conjured up by this music, I have my doubts.

Opening track "Zion" too has that feel of exotic faraway places, but provides an interesting contrast through the unusual and compelling guitar part from Santos pitched somewhere between early 80s Aztec Camera and travelogue soundtrack. "Mutantes" ('Mutants'), the collection's sole vocal track, starts with that warm feel but stretches towards what feels like weightier, more melancholy, issues in its spoken word interlude. Sadly my Portuguese is not up to interpreting, but the feel is something like the unsettling remembrance of innocence lost of the Go Betweens "Cattle and Cane" as if covered by Joyce. The vocals from Joana Espadinha and Magarida Campelo give the piece this touch of unease adding another layer or colour to the palette in consequence.

Santos has a varied biography, which includes a guest spot on Andre Carvalho's excellent Memoria di Amiba, an album that also featured his elder brother Bruno prominently. The elder Santos brother was also influential in inspiring his younger sibling to originally pick up the guitar, to the extent that the right handed Andre recently speculated that his left handed playing style comes from initially trying to mirror his brother! True or not, the album shows that he has developed his own style one that is unusual in a jazz context in taking some influence from the alternative rock of the 80s and 90s alongside the more usual jazz and blues. This helps differentiate him from the crowd and shows that he is not afraid to use distortion in a controlled manner where texture is needed, but also having the judgment to avoid 'rocking out' on all but "Qwerty"`s more traditional blues rock.

To sample this controlled aggression try album closer "Pressagio" ('omen'), where Ricardo Toscano's effective squally sax storm is underpinned by a tense, distorted open bodied electric rhythm. Another good example is "Reverso da Medalha" ('the other side of the coin') which flips from an initially understated late night feel to its more lurid climax, lit up again by the dialogue between Santos and Toscano's alto.

As a Ponto de Partida this collection does a great job of revealing the talents of its leader across a wide range of styles. The only minor criticism, common to many debut albums, is that it feels as if Santos has tried to share so many facets of his talent that a little stylistic coherence was sacrificed. Sometimes this is because the musician is concerned that there might not be another chance to record, but in this case there really was no need to worry. On the evidence of this collection, Andre Santos will be with us for some time to come should he so choose. With or without ice skaters.