By Eyal Hareuveni
March 9, 2010
Sign in to view read count 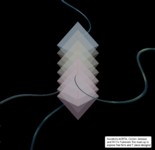 Swedish-born, Brooklyn-based guitarist Anders Nilsson unites two of his working ensembles into his dream project. The Swedish, Malmo-based AORTA and the New York-based Fulminate Trio first played together during Kopasetic Productions' KopaFest in Malmo in 2008. Both groups fulfill beautifully Nilsson's vision and create orchestral, open-ended, multidimensional, improvised music that references the great 1970s fusion bands, but with a much broader scope and liberties—and more importantly, free from the genre's notorious clichés.

Nilsson cites Wayne Shorter's early fusion classic Super Nova (Blue Note, 1969) and the Art Ensemble Of Chicago's records as main influences. John McLaughlin, who played on Super Nova is a clear source of inspiration, as is the rich rhythmic language of AEC, which is incorporated into his sketch-like compositions. But Nilsson's musical vocabulary also owes much to the expressionist works of modern composers such as Anton Webern and Arnold Schonberg, in addition to Bernard Hermann, known mainly for his movie scores.

The first piece, the 15-minute "SoundFear"—an homage to Herrmann's suspense filled constructions—is a slow, melancholic, and impressionistic composition that boils slowly. The rhythm section—David Carlsson on electric bass, Ken Filiano on double-bass and drummers Peter Nilsson and Michael Evans—lays dense patterns before the ensemble forms a kind of thriller theme. "Tuning In" is a tighter piece, with Nilsson taking the lead with a powerful and exciting solo over the shouts of sax players Mattias Carlson and Cennet Jonsson. As the piece evolves, all players collectively outline a clear theme and then begin to improvise on it, including a remarkable two-bass improvisation, with the rhythm section pushing relentlessly, following Nillson's commanding guitar lead.

"Nacken" is a short and dense interlude for guitar, Carlson's flute, and bowed bass, followed by the epic 18-minute "3D," with Filiano's masterful arco solo slowly joined by Jonsson's bass clarinet, Carlsson's flute and Nilsson's guitar. This chamber-like introduction is built with nuanced tension, expressionist space and moody, cinematic feeling. When Nilsson takes the lead, he transforms the spare piece into a meditative, loose fusion improvisation with a majestic solo. The closing "Vortex" is an uplifting, muscular, collective improvisation that demonstrates the tight and fast interplay of this ensemble.

Anders Nilsson´s AORTA Ensemble features an exceptional ensemble with a clear and focused vision—a vision shared both by its leader as well by this adventurous label that keep producing fascinating documents of a new and promising generation of Swedish improvisers.