BY JAKOB BAEKGAARD
February 22, 2016
Sign in to view read count 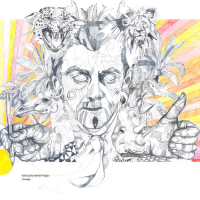 Klimaforandringer (climate change) is a new project from experimental guitarist Lars Bech Pilgaard. Throughout his career, he has moved in many different musical directions, but this project is perhaps his most accessible yet. Here, he has enlisted the talent of drummers Rune Lohse and Anders Vestergaard, bassist Peter Skibsted, fellow guitarist Taus Bregnhøj Olesen and keyboard-player Rasmus Kjær Larsen. Lil Lacy also contributes with her ethereal voice and cello.

Ånder (Spirits) is an album that relies on layered guitars, multiple percussion patterns and simple vocal lines. There is a clear inspiration from African music, for instance the arabesque guitar riff on "Masker/Rød Jord" (Masks/Red Clay), but also heavy distortion and psychedelic sounds.

However, the experiments with sound are driven by catchy melodies and rhythms and a clear joy of playing. The group understands both meanings of the word "play" and while it is certainly artful music, it is also a fun and varied album where the wonder of perception becomes a theme. The haiku-like poetry is poignant and the sounds change from solid stoner rock with lively percussion to spacy synthesizer soundscapes.

While this is an album that is closer to rock than jazz, it has some of the hallmarks of the genre: sophisticated interplay, varied texture and complex, but accessible structures. It once again proves that a new generation of Danish musicians are not that concerned with the boundaries of genre.