By Mark Sullivan
December 28, 2017
Sign in to view read count 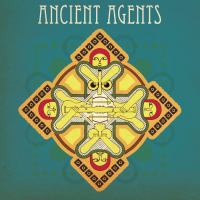 Based in Cape Town, South Africa, the multinational members of Ancient Agents embrace the entire world as their neighborhood in this acoustic world blend. Reza Khota (guitars) is from South Africa: he has worked with many South African musicians (e.g. Kesivan Naidoo, Shane Cooper and Buddy Wells) and takes inspiration from jazz guitar modernists like John McLaughlin and John Scofield. Bassist Schalk Joubert is the other South African in the band: one of the busiest South African session players, he commands South African melodies, West African grooves, and European harmonies. Fredrik Gille (cajon, frame drums, percussion) hails from Sweden: he has collected percussion instruments from all over the world, with Middle Eastern drumming his expertise; but his sound is influenced by everything from Arabic rhythms to Latin music. Ronan Skillen (tabla, hybrid percussion kit, didgeridoo) is Irish: he takes inspiration from the ECM record label's aesthetic, as well as diverse world music styles; he has studied Indian classical music.

All of the members contribute compositions, but the set begins with a collective creation. "Clouseau's Dream" is notable for mbira-like guitar figures. Joubert's "Bokmakierie" shifts the geography slightly with its sprightly South African beat. Khota's The title tune (also credited to the group) is a fine showcase for Joubert's melodic bass playing, also effectively utilizing harmonics. "Misir Wot" employs atmospheric looping for the introduction, then adds Indian raga-influenced guitar lines, tabla, and a bass melody for a definite Indian tone.

Not surprisingly Skillen's sole entry "Sutri's Bells" employs tabla and a gentle guitar ostinato for more Indian flavor: but there's also space for occasional siren-like overdriven guitar lines. Khota's "Unearth" is based around his Afrobeat rhythm guitar, with a jagged melody and solo overdubbed (the album was recorded in one take with minimal editing, and guitar parts like this were the only use of overdubbing). Joubert contributed the final tracks. "Kelefa" is notable for its double-time closing section, with Khota demonstrating blazing fusion guitar chops. "You're The Reason" has a kora-like guitar introduction, followed by a sprightly riff doubled by guitar and bass.

The group produces a joyous sound: melodic, with a groove never far away. In addition to the strong Indian music elements, I was especially struck by the Pan-African aspect. There are South African, West African, and Afrobeat (Nigerian) grooves; and at different times Khota's guitar invokes the mbira (the "thumb piano" associated mainly with Zimbabwe); the kora (the harp-lute employed by jali all over West Africa); and of course the sitar or sarod for the Indian-flavored parts. It is not hard to blend music from around the world, but rarely is it done this well.