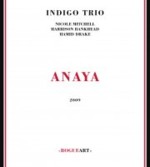 Mitchell's articulation on the flute opens this recording, bright and spry in a joyous orientation that represents the playful, uplifting character of all the music (Mitchell's "Sho Ya Right"). The bass plays a crucial role in unifying the trio, as the reverberating echo to the flute's predominating musical line. The drums explore diversified undercurrents to complement, respond and ornament tones that emanate from both the flute and the bass.

The innocence which the flute channels, pervades the album. Mitchell not only blows through her instrument in an even, full staccato array of notes (Drake's "Anaya with the Sunlight"), but also buzzes, forms vibratos and arranges her breath and voice to invent a language that captivates the essence of meaning inherent in the theme laid before her (Bankhead's "A Child's Curiosity"). How she sculpts the sound (Drake's "Anaya with the Moon"), in her moves from one note to another, maximizes timbre, demonstrates the use of her breath, embouchure and her attention to inflection. Her own "Beloved's Reflection" and "Wheatgrass," in which she plays the piccolo, unveils her capacity, through gleeful vagaries, to make pure, unequivocal space.

Although he utilizes formidable arco technique (bass in "A Child's Curiosity," cello in "Song for Ma'at"), Bankhead performs exceptional solo pizzicato introductions to the music twice ("Anaya with the Sunlight," "Anaya with the Moon"). Generally, his solo pizzicato reveals his sense of detail, timing ("Wheatgrass") and extraordinary versatility with the bass' range of intonation. He can play as delicately in the high register as he would play a mandolin and, in the same gesture, find the lowest rhythmic lithe fingering sets imaginable ("Beloved's Reflection"). Bankhead is the only instrumentalist in his own "Affirmation of the One," where he confirms his mastery of the bent pitch.

Drake reigns as supreme évocateur. His drumming springs forth with intention and certain responsiveness. His talent in drawing abstract aural pictures that complement and extend the quality of the instruments with which he is working is inimitable. Drake becomes not only the rhythmic heartbeat for Mitchell and Bankhead, but also the cloak that surrounds them and the floor on which they stand. The tensionless motion applied to click the metal edge of the snare, the cymbal, and find combinations of the components of his kit, exhibits his reliability, strength and contentment.

Midway through the recording comes the most complex and centered of the pieces, "Song of Ma'at," a collective improvisation. Drake's employ of frame drum exemplifies an apotheosis of his indivisible involvement with moment; moreover, it exposes that the Indigo Trio is one of "God's best answers" for unfurling creative music.