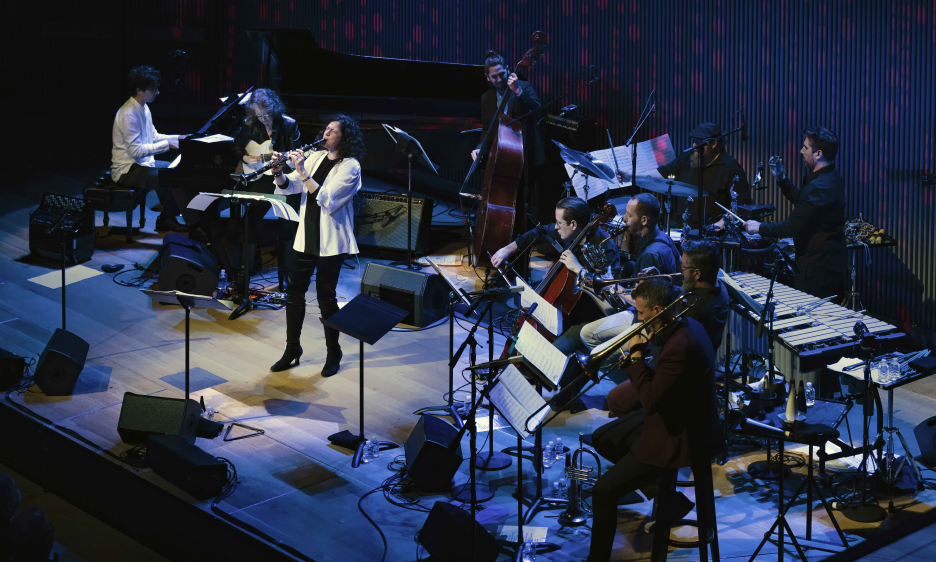 Clarinetist Anat Cohen, a Tel Aviv native, studied at Berklee School of Music in Boston before relocating to Brooklyn. Over the decades, she has received worldwide recognition, including "Up and Coming Artist," "Clarinetist of the Year" and "Multi-Reedist of the Year." She has ranked in a number of critics' polls and was nominated for a Grammy in 2018 for both "Best Latin Jazz Album" and "Best World Music Album."Triple Helix (Ashik, 2019), her latest CD, and her second with the Tentet, was released just before Covid-19 led to shutdowns.

At last, she has had the opportunity to tour with her Tentet and her Quartetinho, a quartet whose intimacy allows her to play chamber jazz where she employs the bass clarinet, an instrument which was crafted in its modern form by Adolphe Sax in 1838.

Cohen's compositions might be best described as ebullient and lively, with interspersed melancholy and bittersweet undertones. The intricate and often angelic layering of instrumental sound (combining trombone, cello, bass, accordion, vibes piano) is what gives the Tentet its distinctive edge.

Even as they took the stage, the synergy between Cohen and her nine band members was in evidence. The last to enter was pianist Vitor Gonçalves, entering with his accordion in tow, and then Cohen herself.

Cohen leaned back and blew on her clarinet to commence "Happy Song," the title track from the group's 2017 debut of the same name. Nick Finzer soloed powerfully on his trombone. The only other woman on the stage, Sheryl Bailey, a band leader and professor at Berklee College of Music, soloed on her electric guitar as drummer Anthony Pinciotti set the rhythm.

After an introductory solo, Cohen faced Bailey as she soloed on guitar, while Pinciotti employed his mallets. A full hour into the music, Cohen addressed the audience for the first time, relating how band members "barely saw each other for the past couple of years" and how delighted she was to be back onstage performing.

The horn section lead for the somber beginning of "Valsa Para Alice," as a swaying Cohen looked on. Gonçalves, sitting on the edge of his piano seat, played his accordion, while Cohen offered up meditative clarinet. James Shipp's lucid vibes sounded as lovely and poignant as raindrops falling on a steamy tropical lotus pond. The band came back in with Josh Reed intoning on his flugelhorn. Rapid-fire accordion was followed by a round of hand clapping led by Cohen, as the tune concluded.

The lively "Loro," an Egberto Gismonti classic, was followed by the evening's final number, Cohen's arrangement of Malian Neba Solo's "Kenedougou Foly," also from Happy Song (Anzic Records, 2019). For this number, Shipp cleverly employed aluminum wrap on his vibraphone to mime the of the marimba's sound.

Following a standing ovation, the band returned for the up-tempo, Klezmer-influenced "Anat's Doina," as Cohen told the ebullient crowd that "You are welcome to dance with us." Gonçalves moved to stage left to use a large, shiny metallic shaker; Cohen pranced and played with her clarinet; then Bailey soloed, as did baritone saxophonist Owen Broder. Cohen then called the band again to bring the nearly two-hours of music to a close.

The next night Cohen was back with the more intimate Quartethino in tow. The quartet format gives Cohen the opportunity to explore her baritone saxophone, Gonçalves to stretch out on piano and accordion and for Israeli bassist Tal Mashiach to demonstrate his skills on seven-string guitar.

As Cohen told NPR nearly a decade ago " Jazz represents freedom, the search of expressing yourself, the idea of real democracy. When you play in a jazz quartet, you have four people that are equal. Yes, there might be a band leader, but once you actually start playing, every person is equal and every voice counts."

Cohen headed straight for her bass clarinet. As she played with lyricism, the eloquent sound of Shipp's vibraphone—enhanced with digital assistance—reverberated, adding texture. Gonçalves offered a lovely piano solo before the tune's conclusion.

The second number began with a pungent bass solo, interspersed with piano and vibes, before Cohen moved in with her bass clarinet to execute a solo which turned from dynamic to meditative, before Gonçalves joined with a piano solo. Cohen returned with her clarinet, which she demonstrated she can even play one-handed!

The next number featured hand drumming and vibraphone from Shipp, a Cohen solo and a lustrous, fast-paced piano solo from Gonçalves.

Then, Mashiach brought over his seven-string classical guitar—"We lured him to jazz" Cohen explained—and began to play as Cohen came in with an impressive solo. Gonçalves then soloed on accordion.

A mournful classical tune—dedicated to displaced people all over the world—followed with Cohen again soloing on bass clarinet before she called the band.

The next tune, a Brazilian lullaby, ended with a standing ovation. Yet Cohen found time for one more: a "quick" choro featuring another bounteous accordion solo before the presentation concluded with yet another standing ovation.