By BRUCE LINDSAY
September 23, 2010
Sign in to view read count 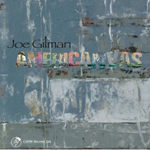 Pianist Joe Gilman leads a young and talented quintet on Americanvas, an album of original tunes inspired by American artists such as Mark Rothko, Edward Hopper and Norman Rockwell. Jazz that takes its inspiration from the visual arts is not rare—British saxophonist Andy Sheppard's Movements In Colour (ECM, 2009) was so inspired, for example. Like Sheppard, Gilman's varied choices are reflected in the music's range of styles and moods ensuring that this is a constantly intriguing recording.

Gilman is an experienced musician and educator, with eight previous albums under his own name, and is a regular in vibraphonist Bobby Hutcherson's band. His fellow musicians on Americanvas are precociously talented players, all members of the Brubeck Institute Jazz Quintet, with abilities already well-established, even at such an early age.

Saxophonist Chad Lefkowitz-Brown also contributes two compositions to the album, including "Whaam!" The Roy Lichtenstein painting used as the basis for the tune is one of the most recognizable images in twentieth century art, and Lefkowitz-Brown's music creates immediate links to the work. A key musical feature is the slightly discordant clash of notes played by Lefkowitz-Brown and fellow saxophonist Ben Flocks at the top of their ascending line. The tension this creates is heightened by Gilman's rolling piano phrases, while Zach Brown's walking bass line and Adam Arruda's cymbals drive the rhythm, adding to the pace and excitement of the tune.

"Cebola Church" is inspired by a Georgia O'Keefe painting. Zach Brown's arco bass gives Gilman's tune its emotional center, aided by a soprano sax solo played with verve and precision, though sadly, it's not clear whether the player is Flocks or Lefkowitz-Brown. Gilman's musical interpretation of another iconic painting—Edward Hopper's "Nighthawks"—successfully recreates the late-night loneliness of the diner and its inhabitants. This is a smoky blues, with a tenor sax lead line that is simple, but wonderfully effective.

"Yellow, Red, Blue," based on a Mark Rothko painting, is another Gilman composition and another highlight. It's a floating, relaxing, composition whose twin saxophones create a rich, enticing sound. Gilman's own piano and Arruda's cymbals add to the dreamlike feel the softness of the instrumental sounds reflecting the gentle calmness of Rothko's composition.

Americanvas is a lovely album, the inspirational artworks are well-chosen, and their musical interpretations beautifully executed. It affirms Gilman's talents as a player and composer, but also acts as an introduction to four young players of great potential.

Gossip; Where the Wild Things are; Cebola Church; Whaam!; Monkey Puzzle; Nighthawks; Color Arcs in Four Directions; Nothing At All of This is Fixed; Nocturne du Romare; Yellow, Red, Blue.