By DEREK TAYLOR
November 29, 2004
Sign in to view read count 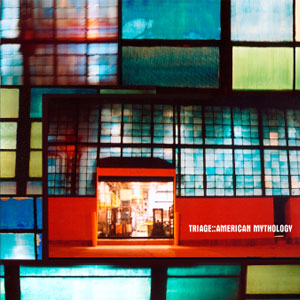 Maximum impact with minimum waste, Triage follows the medical meaning of its moniker to the letter. Each member has a number of different projects to occupy his time. Saxophonist Dave Rempis and drummer Tim Daisy constitute two-fifths of the Vandermark 5. Jason Ajemian wields bass as one half of the avant-folk outfit Born Heller. But when the three hit the stage or studio together, their focus cements on crafting highly-personalized top-quality free bop.

Their latest Okkadisk project builds on the sturdy brick and mortar of their earlier three releases. Its immediate predecessor, Twenty Minute Cliff, required a patient ear to plumb its depths. The new one yields pleasures more immediately. From the twisting hardscrabble head of "2187" advanced by Rempis' ruddy-voiced tenor, these guys dispense with peripheral pleasantries and commence to swinging. Ajemian's thumping pizzicato sinks down the center while Daisy's frothing snare rolls and cymbal shots further propel the proceedings. "Rust Belt" trades momentum for atmosphere as arco bass, ghostly alto overtones and malleted cymbals and toms eddy in a near meter-less haze. Rempis occupies the middle section with fluttering improvisation that moves from wispy spectral notes to hard-edged multiphonics and a surprisingly forceful denouement prefaced by Daisy's tight traps work. This sort of presto-changeo strategy plays out on several other tracks, providing further armor against predictability and tedium.

"Crystal Set" matches Rempis' blustery tenor to a seesawing groove structure. Ajemian and Daisy have a ball gnawing on the rhythmic marrow of the piece. It's a reactive repartee they also share on "White Flies," but compared to other stronger entries in the program, both tunes feel a shade desultory. Saving the best for last, Rempis' "Rong Tones" marks the first of three closing numbers. Daisy opens with another strong tidal pattern from his kit as the composer intones on tenor and Ajemian's ostinato locks down a harmonic focal point. An elastic freeform episode forwarded on the bassist's rubber band string snaps leads into another strong hard-bitten ensemble finish. "In the Afternoon" and "Bus Stop Break" roll out other memorable melodies. The former works as a miniature showcase for Daisy's syncopated toms, while the latter jockeys through another sectional structure that veers from Steve Lacy-style melodicism to funky backbeat-driven groove and back again.

Sharp fidelity renders each instrument strikingly clear in the stereo mix. Even the album's cover art earns plaudits, depicting a colorful collage of Rempis' photographs that jibes with the vivid hues of the music. Triage is a trio still hitting stride. With winsome entries like this one, proof seems positive that plenty of creative wind still lies gusting in its sails.