BY TREVOR MACLAREN
November 29, 2004
Sign in to view read count 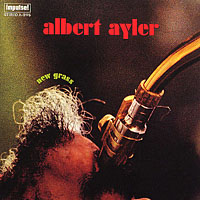 
If there is one word that is poison in the minds of jazz fans and critics, it's sellout. If any musician, for whatever reason, decides to change their sound in a way that could be considered commercial, they have committed the deadliest of sins. So many debate and whine over whether an artist is a sellout, but really, what the hell difference does it make? None. If a record is great, it's great.

Albert Ayler was always controversial. His ripping tenor produced sheets of articulated squeals and buzzes that helped to revolutionize a new kind of jazz. His work was always leading edge or barbarically raw, depending on your critical orientation. But his original approach and methods of delivery differed from Coltrane, Eric Dolphy, Cecil Taylor, Ornette Coleman, AACM and other peers. Like these players, he found his sound and ideology repeatedly scrutinized.

And so it wasn't much of a surprise when he released New Grass that critics would rip him apart. What made this record different is that his cult of fans and critics were the instigators of the attack. Why? He had sold out; he threw out his loose structures for classic R&B arrangements. What they failed to observe is that New Grass is a genius piece of work that welds his sheets of sound to classic African-American styles such as R&B, soul and gospel. How could a man who created sounds that influenced artists ranging from Sonic Youth to John Zorn to Captain Beefheart to David Murray to the Velvet Underground create a record in such a "commercial" format?

Ayler knew this record was going to upset his fans and he took time to explain himself on the opening track "Message from Albert/New Grass." Opening with a primal rant of classic soloing that could have fit anywhere on Spiritual Unity , Albert proceeds to explain his emotional playing as a gift from God and that this record is a further exploration of his sound. He states that he hopes people will like the record... and, well, it sounds like a plea. Why should any artist ever have to explain themselves or their ideas? They shouldn't have to, but Ayler took it upon himself to ask the listener to have an open mind. Yet the record overall isn't as commercial as the critics of the day would have us believe. Sure, kicking tunes such as "New Generation" and "Heart Love" have grooving R&B/soul/gospel arrangements with vocals, but his solos still rip with bloody emotion. Yet "Sun Watcher" is a ripper; though not as harsh as his earlier work, he still holds onto his ideals.

Though Impulse! has been accused by critics of pushing Ayler into making a commercial disc, it seems strange that the label would have, since much of its roster consisted of free jazz artists. They were, after all, responsible for releasing the majority of John Coltrane's riskiest and most experimental work. After many spins it seems more that Ayler was looking for a new way to explore his music than just making a record that would reach a larger audience. The solos on this record would have never gotten airplay then, nor would they get it now. His squeaks and honks may have R&B riffing, but the solos are too gritty for most to handle.

That is why it is time to re-evaluate this record and accept it for its musical merits. The chops are solid and the arrangements are tight. Sure this may be the first time you hear yourself humming an Ayler tune, but it doesn't minimize the genius he put into this record. It shows an artist at a turning point, and because of negative feedback it remains an obscure record, instead of a big seller. It is time that we as jazz fans open our minds and be willing to allow artists to try on different suits. Sure quite often the results are horrid, but often the results are like New Grass.