Tyler Kaneshiro: Amber of the Moment 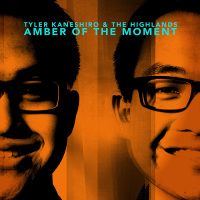 First impressions mean everything. Amber of the Moment, trumpeter / composer Tyler Kaneshiro's debut album opens with a cloying cover of Bjork's "Who Is It." While nicely rendered, and suitably arranged, Kaneshiro's version plays it safe, replacing all of the oddness of the original with slick nu-jazz gloss. The cover of Bon Iver's "Holocene" fares better, though it's not that interesting a tune to begin with. Further penetration into the tracklist of Amber of the Moment, however, reveals that Kaneshiro's overall musical vision is a bit more individualistic than his cover versions would lead you to expect. Occasionally, the music here even gets a little transgressive. The first such move comes courtesy of guitarist Keisuke Matsuno, whose gloriously effects-laden solo on "Irene" is both eloquent and attention-grabbing.

The party continues with Matsuno's own piece, "Elevator," a dynamic 6/8 romp which uses an extended feedback-charged drone as a jumping-off point. Kaneshiro's "Dawn at Sea" is a dark, rubato piece enlivened by Chad Lefkowitz-Brown's emotive tenor solo against a backdrop of sizzling cymbals and spectral electronic sounds. "Passing Fields" is yet another pretty tune that is abruptly energized by Matsuno's guitar solo. The remainder of the album is less distinctive, but thoughtfully composed and arranged, with warm, inviting surfaces reminiscent of contemporary fusion artists such as Brian Blade's Fellowship, James Farm, and Kurt Rosenwinkel.

As a player, Kaneshiro takes some cues from Dave Douglas: he's an economical soloist with a clear, bright, almost classically-informed tone, but with unmistakably jazzy phrasing. His website has a section dedicated to his work in film scoring, which seems compatible with his musical vision as presented on Amber of the Moment.

Who Is It; Irene; Elevator; Dawn at Sea; Holocene; Time That Never Was; Passing Fields;'Til We Meet Again; Our Love.