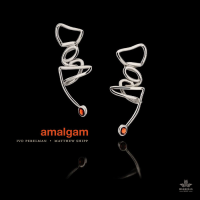 Amalgam constitutes the seventeenth disc, spread across ten albums from the near symbiotic union of Brooklyn-based Brazilian tenor saxophonist Ivo Perelman and American pianist Matthew Shipp. And that doesn't even touch on Perelman's many trio and quartet dates which include Shipp. So it's fair to say that they know each other's unique styles fairly well by now. Even so each session seems to refine and expose new facets of their interplay. While previously documented encounters like Live In Nuremburg have presented expansive concert performances, this studio recording has resulted in a dozen exquisitely fashioned duets.

In the liners, critic Neil Tesser who has more familiarity with this pairing than most, asks what's new? His answer is "a shift in focus, from the macroscopic to the microscopic; from relentless exploration to an intense consolidation of concepts and material." Each track comes packed with event, before often sudden, usually unresolved finishes. Perelman reveals a reflective side, intermittently plaintive amid the throaty growls and insistent falsetto. Shipp reciprocates in kind, with sparse gentle expression, alongside his usual impulsive mutability. He's relaxed, almost lyrical on "Part 1," though with a lemony twist, as they continue, closely entwined.

They are almost too together on some of the prancing synchronization, but typically veer off-piste before such moments outstay their welcome. That's par for the course of their constant hyper responsive dialogue which quickly evolves with abrupt mutations, without ever signaling its destination. In their volatility, they occasionally touch on a warped tonality, but remain utterly distinctive, regularly introducing notable episodes like the lovely ending to "Part 8" where Shipp's flinty piano ripples match Perelman's seesawing tenor cry.

While each piece is self contained, they are programmed to provide a similar arc to a live situation, comprising a series of peaks and troughs, culminating in the dramatic wails and lurching bombast of "Part 11," which persists in the muscular interchange of "Part 12" until they fade out in a repeated lockstep. This is duo playing of the highest order.