Under-recorded when measured against his contribution to jazz performance, Batiste is one of the few clarinetists who made a place for his instrument in the avant garde.

A preeminent music educator and influential clarinetist, Alvin Batiste's impact will be with us as long as jazz is performed. From his founding and leadership of the Jazz Institute program at Southern University in Baton Rouge to his current work with the New Orleans Center for the Creative Arts, clarinetist Alvin Batiste has influenced three generations of musicians. His students are among today's most recognizable working jazz artists and with pianist Ellis Marsalis he keeps New Orleans' jazz birthright from becoming an historical artifact. Saxophonists Branford Marsalis and Donald Harrison, drummer Herlin Riley and bassist/American Idol judge Randy Jackson are the tip of the iceberg when it comes to Batiste apprentices.

Under-recorded when measured against his contribution to jazz performance, Batiste is one of the few clarinetists who made a place for his instrument in the avant-garde. A member of the landmark intergenerational Clarinet Summit (India Navigation, 1985) and Ornette Coleman's early California band as well as a sideman with Ray Charles, Batiste has also lent his remarkable mastery of tone, time and timbre to recordings by drummer Billy Cobham and saxophonist Cannonball Adderley. His Late (Columbia, 1994) showcases a musician who easily moves from swing through the avant-garde without sacrificing inventiveness. Batiste holds a Master's in clarinet performance and composition and his book, The Root Progression Process: The Fundamentals of African American Music (Jazztronauts) is viewed by many improvisers as required reading.

In his sixth decade as a performer, it was "third or fourth cousin" saxophonist/producer Harold Batiste, who first had him take the clarinet seriously. "My dad put it together, I blew a few notes and then I put it down... he threatened to sell it... but the summer before I went to high school I went to Harold's house... I heard Charlie Parker for the first time." An early inspiration was also clarinetist Jimmy Hamilton who Batiste heard at his high school, Booker T. Washington, a school that also included trumpeter Joe Newman, trombonist Benny Powell, pianist Salvadore Doucette and drummer Edward Blackwell. Years later, it was Hamilton who Batiste called to father the Clarinet Summit sessions. Batiste remembers, "Jimmy Hamilton... he was really one of my heroes because Duke used to come play at my high school auditorium and I used to carry Jimmy Hamilton's clarinet so I could get in and listen to him warm up and enjoy the music... when I got a gig with the Ellington band it was because Mercer Ellington heard me and said... hey you remind me of Jimmy... when we got ready to do the Clarinet Summit I called Jimmy in the Virgin Islands... he said you all have to remember that I haven't been playing so my lip is not as strong as it used to be... but the first day of rehearsal we must have played about eight hours and Jimmy was the last man standing... a great player."

A significant event in Batiste's career took place when as a teenager he headed out to the West Coast to play with Ornette Coleman: "the band was at Ornette's house... it was right across the street from the California Club... When Blackwell and Harold and Ellis went to Los Angeles to get rich and famous they called me up at the end of the school year... I think it was 1955... and they said man, come on out here we are going to get into something... Ornette was down here about four or five years ago and I played a set with him at the New Orleans Jazz Festival and [saxophonist] Kidd Jordan was there and Ellis too... it was like we had never been separated."

The recent devastation affected Batiste on a very personal level. "With Katrina I am living in a trailer in New Orleans... I am in Baton Rouge now because I come here to take a deep breath... we had 12 people during the storm here, it encouraged you to sleep fully so you would give someone else some moving space. I've written three symphonies and three urban operas... the last one started off with Katrina: The Songs of Life... one day I was laying in bed and this still small voice said get up, write this up and it was music and that is how Katrina started." 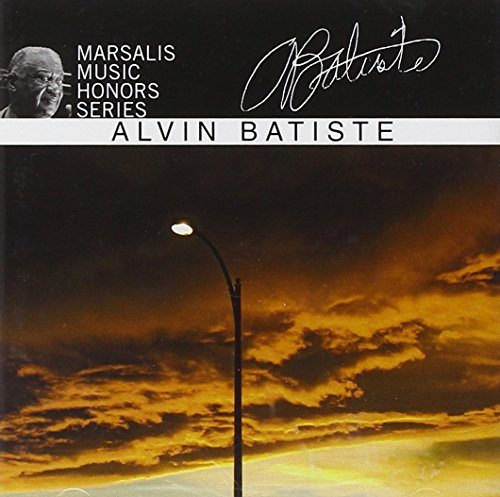 Batiste's most recent CD (Marsalis Music Honors), is produced by student Branford Marsalis, "I think he [Branford] wanted to do an old and a new kind of thing—everyone was younger than me." One listen is quick evidence that Batiste's playing is still a clarinet clinic. In the context of these younger musicians, that include Riley and Marsalis, along with vocalist Ed Perkins, the session surprises with its contemporary sound. This is in no small part due to the presence of young musicians such as pianist Lawrence Field, bassist Ricardo Rodriguez and guitarist Russell Malone. A true family affair, Batiste's wife adds lyrics to "My Life is a Tree" and provides the title for a lovely ballad in her honor, "Edith". Batiste's son Maynard penned touching lyrics to the bluesy "Ever Loving Star" while the quirky rhythm of swinger "Bumps" was inspired by Batiste's grandson's nickname. Nuggets like his classic "Salty Dog", from days with Cannonball Adderley, and the Charlie Parker inspired driving bop of "Bat-Trad", paint a fittingly contemporary portrait of this clarinet master and mentor.

Ever the champion of his instrument's place in jazz, Batiste is quick to point out the great New Orleans clarinetists that influenced him beginning with Sidney Bechet, "... Bechet is a great man... I included his "Blue Horizon" in my book because that is the first true composed blues in music. There are a lot of wonderful clarinet players in New Orleans and some of them have passed recently... like Mr. Cotrell, Willie Humphrey and Clarence Ford... Pete Fountain is still happening as is Ralph Johnson and of course Dr. Michael White... it is in the culture...it is all pervasive... there is a relationship to march music and the clarinet is one of the main instruments in that idiom." Reflecting backward, Batiste states, "I started out as one of Charlie Parker's children but I have been in New Orleans most of my life... if you know the ethnic idiom... when you hear me, you should hear some of that." In a beautiful recapitulation of those thoughts, today's generation of jazz musicians have the same sentiment when it comes to Alvin Batiste.

Postcript: Shortly after this article went to press the jazz world was saddened to learn that Alvin Batiste had passed away. The material for this piece was gathered from conversations I had with him on the phone from New Orleans and in person at the Cape May Jazz Festival. I treasure the fact that I heard him play live and witnessed first hand his incredible abilities as an educator. He lives on through the thousands of people he touched with his music and teachings.