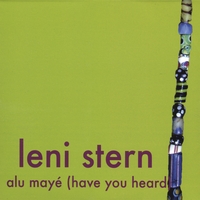 Guitarist Leni Stern has always been an artist willing to push the boundaries of her creativity. Upon visiting the African nation of Mali in 2006, the multi-faceted guitarist/vocalist engaged in an experimental blending of her unique musicianship with a group of authentic African vocalists and instrumentalists. The resulting five song EP, Alu Mayé (Have You Heard), is a profound undertaking of personalized musical statements that seamlessly intertwine the diversity of distant cultures.

Along with four percussionists and three singers, the alluring sound of the n'goni, a lute-type instrument played widely throughout Mali, dominates the textural landscape of the music. Used in accompaniment and as a solo voice, the four n'goni performers create a captivating presence, complimented by Stern's electric and acoustic guitar layering.

Guest performers include guitarist Mike Stern, Leni's husband, who lends his signature scorching lines to "Ite ta Ninye, and the late Michael Brecker whose tenor saxophone envelopes "Ousamane and "Saya (For Don Alias). The latter is an especially poignant tribute to the late percussionist who first exposed Stern to the rich similarities between African and jazz music.

The disc closes with a beautiful cover of Bob Dylan's "It Ain't Me Babe, featuring Stern's soothing rasp on the timeless lyrics and Haruna Samake on the camelagoni. It's a touching finish to a session full of serenity, sorrow and hope.