BY ELLIOTT SIMON
December 21, 2007
Sign in to view read count 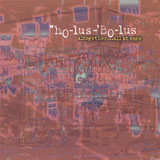 Baritone saxophonist Josh Sinton's quintet Holus-Bolus, boasting two drummers and an upright bass in addition to alto/soprano saxophonist Jeremy Udden, certainly does not lack a solid instrumental bottom. Brooklyn-based, the members also share a lineage that connects to the stellar jazz program at Boston's New England Conservatory with an umbilicus to soprano saxophonist Steve Lacy. Both horn men did stints with the Either Orchestra, and while Altogether...All At Once, a title that defines the band's moniker, shares that larger ensemble's creative approach to a broad mix of music, its voice is much more delicate than one might expect.

Drummers Marc Riordan and Kota Nakamura with bassist Peter Bitenc create a very open soundstage, and while each instrument is certainly capable of overpowering, Sinton creates exquisitely put-together pieces that expose nuance. Doubling on bass clarinet he also adds a warmth to the overall feel of compositions like the touchingly elegiac "Leave a Light On (For Steve Lacy), whose bowed bass, soprano sax and bass clarinet alternately wail for the sax man's return.

The band shines brightest when engaging in subtle interpretations of melodic tunes such as Radiohead's "Scatterbrain, the Beatles' "Long and Winding Road and their own extended and ethereal "Mobilium Perpetuum. All this is not to say, though, that these guys can't blow and rock, doing so on the halting swing of the opener, "Dirt Track, the emotionally frenetic "Fear and Happiness and the double-drumming, hard-bopping closer, "The Cube. Although this latter feel is perhaps more what one might expect from such an instrumental lineup, Sinton uses technique, tone and resonance to surprise, intrigue and delight on this strong debut.

Dirt Track; Fear And Happiness; Leave A Light On (for Steve Lacy); The Long And Winding Road; Mobilium Perpetuum; Scatterbrain; The Cube.

Title: Altogether...All at Once | Year Released: 2007 | Record Label: Self Produced