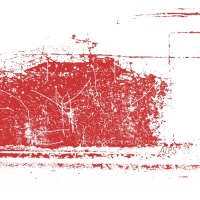 A release on the Dancing Wayang label is always cause for celebration for several reasons. Firstly, they are few and far between, with Alps being only the label's ninth release since it began issuing records in 2007; rarely do two appear in a year, and never more than two—which makes 2014 a special year as Alps follows the release of Motion by N.E.W. earlier in the year. Secondly, the reason for their scarcity is that each Dancing Wayang release is a labour of love, with great care and attention to detail lavished on each one. That extends from the careful selection of the artists who appear on the label (usually solo performers or well-paired duos) through the recording process (always studio-recorded by label proprietor Anna Tjan herself, never concert recordings) and on to the sleeve art of the 180 gram vinyl, which is so good that framed limited editions of it are made available. As a result, every release is an instant collector's item, so their limited editions of 500 copies per issue tend to go like hot cakes...

All of the above is exemplified by Alps, recorded (as ever for Dancing Wayang) at London's Eastcote Studios, in June 2013. The pairing of guitarist Oren Ambarchi with visual artist—the sleeve art is his work—and percussionist Eli Keszler is featured on two extended tracks, one per side of the record, "Alps I" and "Alps II," with durations of just over twenty and fifteen minutes respectively. Straight from the beginning of side one, the sound quality is exquisite as the telltale tones of sustained bowed cymbals ring out repeatedly, underpinned by the rumbling drone of Ambarchi's guitar. As a soundscape, it would not surprise aficionados of Ambarchi's work, but some seven minutes into the piece, Keszler demonstrates that he was an inspired choice to be paired with the guitarist. With no obvious prompting from Ambarchi, the drummer lets rip with a polyrhythmic barrage that lights the fuse of an energetic exchange between the two in which neither is the obvious leader, but which maintains its momentum and pulse thanks to some inspired cymbal work from Keszler. It straddles genres, having elements of improv, drone and noise, but retains the energy of rock music right through to a slow fade that comes complete with static crackle. Very satisfying.

Turning the disc over, "Alps II" displays some of the same strengths as its companion, particularly high energy, momentum and an equal balance between guitarist and drummer. Rather than mixing genres, it owes most to rock music as it is essentially a prolonged guitar solo. That does not mean Ambarchi dominates to the exclusion of Keszler, though. As before, the drummer provides a solid foundation to the piece, allowing Ambarchi time and space to conduct a thrilling forensic exploration of his axe. The combined effect is as stimulating and engaging as before. Way up there with the best that Dancing Wayang has to offer. Praise indeed.