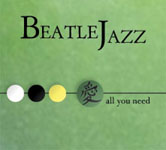 Remember when Miles Davis used Michael Jackson's "Human Nature" and Cyndi Lauper's "Time After Time" as concert staples? The uproar over his choices brings up a question: What, exactly, is a standard? Is the definition strictly limited to the contents of The Great American Songbook? Or is it simply a tune that did not originate as jazz, but was adapted to the genre? Thanks to artists like Brad Mehldau and Richard Glasper, Radiohead is now considered prime fodder for jazz interpretation; also, Cassandra Wilson covered "Time After Time" on her Davis tribute, Traveling Miles (Blue Note, 1999).

My point is twofold: First the songs of the Beatles can easily be considered standards for recent generations; second, it's not what you play, but how you play it. I was living in London when Help! was a first-run film, so I'm pretty protective of the Fab Four's original recordings. I even reject Let It Be: Naked (Capitol, 2003), despite George Harrison and Ringo Starr's disparaging comments about Phil Spector's production techniques on the original record. That being said, All You Need—Beatlejazz's fourth examination of the group's collective and solo works—is most successful when it's totally unfaithful.

The swinging, multi-time-signature "Lady Madonna" and the aggressive "Cold Turkey" really shake the music up, and Bruce Melvin's tabla combines with Larry Grenadier's sitar-like bass on the opening of "All Things Must Pass" to dig deep into Harrison's post-Beatles relationship with Ravi Shankar. It also acts as a fine precursor to Dave Kikoski's evocative treatment of the original melody. Kikoski and company morph "Fool on the Hill" into a whimsical waltz, further lightened by Toots Thielemans' signature harmonica. Thielemans also adds a reflective tone to Paul McCartney's "Waterfalls" and injects a placid space into the gritty rendition of John Lennon's "Beautiful Boy." The overall feel of the latter tune embodies New York City, Lennon's adopted hometown, while Thielemans' segments act as the safe place John and Yoko tried to give their son Sean.

Joe Lovano's contributions are anything but placid: His wild tenor takes "The Continuing Story of Bungalow Bill" a long way from its Dylan-esque origins, and brings Lennon's "Look at Me" back to New York with a bluesy, gravel-coated solo. Lovano's work is as satisfying as Richard Bona's is disappointing. Bona pales in comparison to Grenadier, whose fat lines and alternate solos are perfect foils for Kikoski's outstanding keyboard work. Traditionalist that I am, the three tunes Bona appear on are too faithful, and seem shaped specifically for smooth jazz airplay.

The line from "Revolution" goes, "If you're talkin' 'bout destruction/Don't you know that you can count me out." But once again, All You Need works best when reverence is chucked out the window and Beatlejazz starts the creative process from scratch. I mean, if "You say you want a revolution," why do things the same old way?