Lauren Kinsella & Alex Huber: All This Talk About

By IAN PATTERSON
April 2, 2012
Sign in to view read count 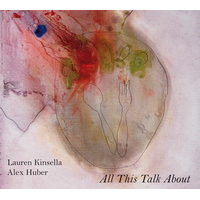 In the thirty minutes of improvised vocals and drums (a daring premise to begin with) on All This Talk About, Lauren Kinsella and Alex Huber— from Ireland and Switzerland, respectively—forge a rare and exotic partnership. The high-wire acrobatics of Kinsella—emitting a Joycean stream of consciousness with all manner of articulations, both syllabic and non-syllabic—will prove challenging to those who prefer their vocal jazz, well, unchallenging. Her unique, edgy improvisations are peppered sparingly, however, with more traditional and quite beautiful lyrical flights. The juxtaposition of these two extremes is at once jarring and alluring, like going back and forth between a confounding labyrinth and open space bathed in warm, soft sunlight.

Three of the seven tracks are variations on "The Thought-Fox," by English poet Ted Hughes. The first minute of "Thought- Fox" has a jittery, nervy quality, with Kinsella drawing out the words and then compressing them in accelerated, ecstatic rushes over Huber's restless percussive rattling. A slightly eerie, sustained wash of cymbal signals new a direction, and Kinsella's captivating voice takes wing as the fox of the lyrics first emerges. The London-based singer breathes an effortless gospel-blues, and the seamless return to the free-form shrieks and the sharp intakes of breath that shape the words is every bit as impacting as the sudden interjection of lyricism was before.

Broadly following the same lines, "Thought-Fox 2" and "Thought-Fox 3" are gentler, less strident interpretations of Hughes' poem, with Huber's brushes acting as a balm on the former, and Kinsella's clear articulation balancing between song and spoken word. The vocal contours on "Thought-Fox 2," however, dissolve into a free-form improvisation of fractured rhythms, ululations, sharply undulating tones and child-like voicing. The first half of "Thought-Fox 3" is more sung than spoken, yet still has the feel of in-the-moment experimentation. The second half—initiated by Huber's more urgent brushes—swings between duo dialogue and Kinsella solo.

A more defined narrative flow characterizes "Except in My Dreams," a lyrically arresting examination of failed love. Kinsella's drawn out syllables contrast with Huber's bouncing rhythms, which are colored by brief pressed rolls and constantly varying cymbal dynamics. Huber's minimalist melodica gently infuses a blue tone in the quietly absorbing "They Don't Mind." Here, Kinsella's somewhat abstract lyrics and spontaneous melodic flow are like "found thoughts" instantly transcribed into sound, perhaps mirroring most closely the creative process behind her inspiration, Hughes' "The Thought-Fox."

Kinsella's use of a loop station adds vocal layers to the title track and "Throwing Back," where Huber's cymbal cries like electric feedback. Both are minimalist vignettes, with Kinsella riffing on "found sounds." Huber's melodica reappears fleetingly on the former track, with his firecracker percussion patterns once again providing impetus—and striking contrast—to Kinsella's natural, breathing-rhythm articulations.

It's impossible to remain indifferent to Kinsella and Huber's bold musical dialogue. A leap of faith may be required for the less curious, but for those who seek innovation and courage in music making, the rewards are there in abundance.