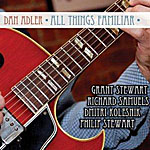 All Things Familiar is a hard-swinging modern bop album led by guitarist Dan Adler. Adler has surrounded himself with a strong ensemble cast for the record, including pianist Richard Samuels, bassist Dmitri Kolesnik, drummer Philip Steward and saxophonist Grant Stewart. The album rests firmly in the jazz tradition without sounding like a carbon copy of an historical recording. The group comes together to lay down tracks that are full of bop vocabulary, deep-pocket swing and highly-creative improvisations.

The tunes on the album are a mix of originals written by Adler and arrangements of classic jazz standards. Each arrangement is fresh and not simply a retelling of these often-recorded tunes. A great example of this is Adler's arrangement of "Star Eyes." While all the elements of the original tune are present in Adler's version, he adds a series of dissonant piano voicings under the intro and A sections of the melody that immediately maks the tune his own. Before going too far with the dissonance, Adler brings the tune back into a swing feel with more standard voicings for the bridge, essentially cleansing the sonic palette before returning to the dissonant harmony for the final A section. It is moments like these that prevent the album from becoming a blowing session, as each of the standard tunes is approached from a new and unique angle.

Adler's playing is consistently solid on every tune. Firmly steeped in the bebop tradition, rarely does a line go by that doesn't exude a deep understanding of the genre's vocabulary. Not that Adler is simply "running lines" in his solos, his playing goes much further than that. While many players will run long lines and phrases taken directly from classic bebop solos, Adler's playing has evolved to the point where he is creating his own new and unique melodic ideas that use elements of bebop vocabulary, but are far from the realm of pure imitation. His solo on "Blues for Keren" is a great example of how Adler takes traditional vocabulary and makes it his own. The solo is full of short bebop motifs that Adler then warps and spins into new phrases that lift his playing to a level where it stands alongside some of the best modern bebop recordings of recent years.

All Things Familiar is filled with hard-swinging grooves, twisting and turning bebop based runs and smart and creative melodic interpretations. The rhythm section is tight and they constantly react to cues from the soloists, while throwing some back as well. All of which combine to lay down an album that is as easy to get into musically as it is intellectually engaging.

If I Were a Jazz Man; Star Eyes; You'd Be So Nice To Come Home To; Talia's Waltz; All Things Familiar; Sivan's Samba; Emily; Blues for Keren; I Love You; Bird's Idea.