By IAN PATTERSON
December 31, 2017
Sign in to view read count 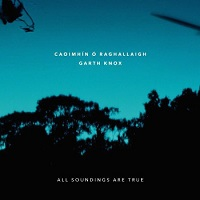 Unlike notated music, where one wrongly sounded note can jar terribly, improvised music obeys no stringent laws. It can jar but it's never wrong. Indeed, the concept of what constitutes music—our appreciation or tolerance for some sounds but not others—is frequently challenged by improvisers, for whom all sounds are valid. Fiddler Caoimhín Ó Raghallaigh (This Is How We Fly, The Gloaming) and violist Garth Knox (the Arditti Quartet, Ensemble InterContemporain, Saltarello Trio), have long applied such a free-spirited philosophy to traditional and contemporary music. All Soundings Are True, however, marks the first time that their strings have intertwined.

Ó Raghallaigh's ten-string hardanger d'amore—somewhere between a fiddle and viola—and Knox's viola d'amore are largely indistinguishable here as they navigate minimalist, often abstract terrain. Harmony and melody are not in short supply, but as on "Sundhelm," follow an undulating course punctuated by sawing rhythms, edgy keening and pizzicato play. The somewhat ghostly melody of "Fluctus" floats on a current of quietly rhythmic urgency, the stark contrast between meditative and insistent accentuated by the tune's minimalism; the tension between airy lyricism and unpredictable edge here is evocative of Ó Raghallaigh's solo outing Music For An Elliptical Orbit (Diatribe Records, 2014).

There's greater experimentation in deconstructions of traditional tunes "Tasseography" and "Albanach" with their post-production sci-fi noodling, while the ballad "County Down," played as a delightfully slow air, has a more organic feel. Ó Raghallaigh and Knox converge to greatest effect where the music's course is unknown, as with the pizzicato sparks and restless strumming of "Blindsight," the zither-like sonorities of the abstract journey that is "Tsumba," the brooding lullaby "Minutus" and the quasi-psychedelic "Ramé," where fiddler and violist create swirling eddies of overlapping sound to close a fascinating recording on a fittingly genre-defying note.

All Soundings Are True is perhaps best appreciated in its forty-two-minute entirety, as it's only with uninterrupted listening that the contours of the duo's dialog fully reveal themselves. With this quietly provocative collaboration Ó Raghallaigh and Knox reveal the symmetry between lyricism and dissonance, concrete form and wispy impressionism, tradition and modernity. Subtly beguiling.