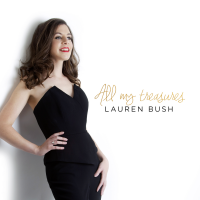 "I love the human race," sings Lauren Bush on the opening track of All My Treasures, Bob Dorough's life-affirming "I've Got Just About Everything I Need." It's a positive sentiment, just one brief moment on an album that bursts with positivity, an album that sounds like the product of a mature and very experienced artist. Surprisingly, it's the debut release from a singer who's yet to reach 30 years of age.

Bush—born in Canada and now based in London—is joined by an excellent trio, of pianist and arranger Liam Dunachie, bassist Andrew Robb and drummer David Ingamells on a collection of jazz standards (with one exception). Producer Ian Shaw—no mean performer himself—brings his wealth of experience to the recordings as well.

"I've Got Just About Everything I Need" opens proceedings at a pretty frenetic pace, showcasing Bush's strong yet evocative vocal style. She swings and scats with panache, her delivery ensuring that every word is clear and precise. The similarly fast-paced "I'm Old Fashioned" re-establishes Bush's vocal credentials: there's also a musical contrast between the lyric and Brandon Allen's modernist tenor playing, before Dunachie's genuinely "old-fashioned" closing piano.

"A, You're Adorable" can easily fill a listener's ears with treacle. Bush treats it with respect, but her voice—and Donachie's refreshingly original arrangement—give it a knowing humor. It's still a tad cheesy, but Bush adds a certain ambiguity—does she really mean it or is she taking the mick? Slowing down and delivering more romantic and downbeat numbers—the lovely versions of "Charade" and "Detour Ahead" for example—Bush remains in command, projecting the songs' emotional shifts and turns with subtlety.

In amongst all of these jazz standards, "Feelin' Alright" comes as a bit of a (pleasant) surprise. Written by Dave Mason, it's probably best known as recorded by Traffic in the late-60s: despite the title, lyrically it's not a feelgood song. Bush's version (arranged by Dunachie and Shaw, with Dunachie on electric piano) is stripped-back, accentuating the funky rhythm and the vocal interplay between Bush and Shaw. It closes the album with a nod towards the Woodstock generation and a hint of the breadth and depth of Bush's influences. All My Treasures is a great first outing and Bush is one of the freshest and most exciting vocalists to appear on the scene for some time.