Sandy Sasso: All My Men

BY SUZANNE LORGE
February 19, 2006
Sign in to view read count 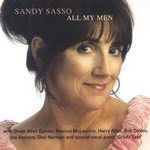 Sandy Sasso's voice is as rich as the brown eyes smiling on the cover of All My Men. The title and photo suggest a mere flirtation, but the artist delivers serious music with her smiles. In her liner notes she dedicates the album and her original composition, the title cut, to the musicians with whom she works—a venerable bunch, with the likes of Grady Tate on guest vocals and Onaje Allan Gumbs on piano. Marcus McLaurine (bass), Harry Allen (tenor sax), Bob DeVos (guitar), Desi Norman (vibes) and Joe Ascione (drums) complete Sasso's complement of top-notch session players.

Sasso, a hands-on singer, doesn't rest on the considerable talents of her cohorts; she contributes arrangements, additional lyrics and two originals to the disc. Aside from the originals—the aforementioned "All My Men and the whimsical, moderate swing tune "Just Whistlin' Along —Sasso prefers an inventive take on standards. She includes a bossa "Love For Sale," a traditional bluesy "Black Coffee and a snappy "Saturday Night Fish Fry. One surprise: Sasso's luscious version of "Tin Man, the 1974 pop hit by the band America, which lends itself effortlessly to the jazz ballad idiom.

A regular at the 55 Bar, Sasso enjoys an active performance schedule, primarily touring the Northeastern US and fronting all types of bands, from small combos to jazz orchestras. In her decades-long career Sasso has worked with several iconic bandleaders, like Benny Goodman, Jimmy Dorsey and Nelson Riddle (under the direction of Riddle's son, Christopher, the Nelson Riddle Orchestra played on her first CD, Mixed Grill). She also counts heads of state among her esteemed listeners (Sasso performed for the late President Reagan at his second inauguration).

Despite such stellar credentials, Sasso's appeal is to the everyman (and everywoman). The album closes with her whistling into a fade, "just...digging life's tune, as her lyrics go. With All My Men, Sasso urges us to do the same.