Home » Jazz Articles » All Jazzed Up: Looking for a Jazz Center Within the Folds of the B...

655
The Art and Science of Jazz 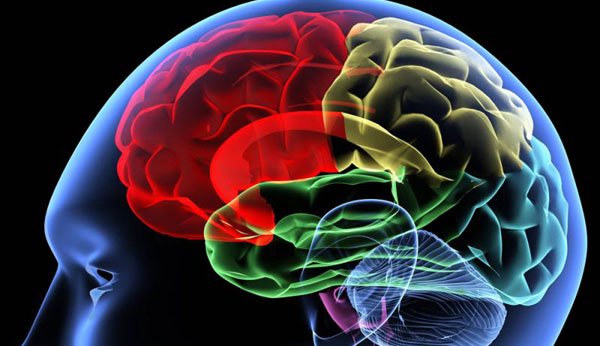 By Hrayr Attarian
January 3, 2011
Sign in to view read count
Music is a universal phenomenon across all human cultures both past and present. In that respect it is much like language, and as the understanding of language comes naturally to humans, so, too, does appreciation of music. Language has been mapped to distinct areas of the brain for well over a century, and relatively recently there have been successful efforts to the same thing for music.

Before talking about these brain areas it is important to understand the basics of brain mapping.

Much of our modern understanding of localization—where major functions are located in the brain—comes from the work of German Neurologist Korbinian Brodmann who, in 1909, published a treatise in which he identified 52 distinct areas on the surface or cortex of each hemisphere of the brain, based on the type of cells and the way they were structured into layers. The brain is made up of two hemispheres—a dominant and non-dominant one—that are mirror images of each other. Dominance is purely based on where language is localized and, in over 90% of the population (all right handed and ambidextrous and 50% of left handed people), it is in the left one.

Some of the Brodmann areas were later found to have distinct functions. Areas 41-42 are now known to be the areas responsible for hearing. These areas are not only the primary relay for sound, but they also communicate with areas of language understanding (Wenicke's area), language production (Broca's area), and their corresponding areas on the right. In addition, they have a close relationship with the secondary auditory area or the supramarginal gyrus (area 40), and the tertiary auditory area or the angular gyrus (area 39). See Figure 1 for a map of where these areas are located.

The primary auditory area identifies the fundamental elements of music such as pitch and loudness and the secondary area processes the harmonic and melodic patterns, while the tertiary area is more concerned with the overall music appreciation. Incidentally, this is also the area responsible for higher processing of language and mathematics. These areas also link to the Limbic system (figure 1b), which is responsible for emotions and, hence, the emotional impact of music.

Generally speaking, rhythm—the relative duration and distribution of notes—is perceived in the left or dominant areas 41-42, when the sounds are brief, but tends to involve the corresponding regions in the non-dominant hemisphere, when the sounds are longer. Harmony—the relation of simultaneous tones to each other---and timbre—the specific difference in sound of more than one instrument playing the same notes—are usually assigned to the non-dominant hemisphere. 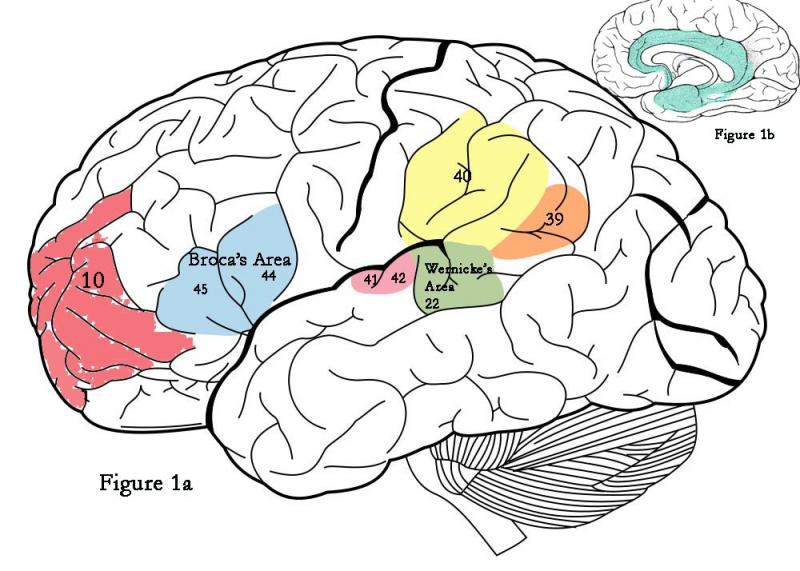 The advent of functional magnetic resonance imaging (fMRI), a scientific tool that is able to map brain function and superimpose it on brain structure, has helped scientists identify yet another area that becomes active in music appreciation: Brodmann area ten, or the rostromedial prefrontal cortex, which is usually involved in high level planning, executive function and memory. Furthermore, there is evidence that when a listener expresses enjoyment, the regions of the brain usually associated with sexual and food pleasure and addiction also activate. Therefore, music appreciation involves processes of memory, emotion and higher mental functioning, in a way unifying all levels of brain activity into an integrated whole. Interestingly, people exhibit the same response whether they are actually listening to or imagining music (playing a song in their head).

This is obviously a very simplified version of a complex and dynamic phenomenon.

So what happens in the brains of musicians? Studies utilizing fMRI have shown that musicians activate a larger area of their dominant hemisphere's primary auditory areas than non-musicians when listening to music, but not when listening to other sounds. Other studies have also demonstrated that, in fact, not only do musicians activate greater parts of their auditory areas, but they also have larger auditory areas where size is commensurate with level of training. Moreover, other parts of brain involved in coordination and manual dexterity also are larger in musicians than they are in non-musicians, and the size again correlates with years of experience.

What about jazz and improvised music? A recent discovery demonstrated that certain brain regions are more active, and others virtually shut down when improvising, as opposed to playing a preset series of notes. Areas of the brain involved in planning, monitoring one's self and self-censorship are virtually shut down, while areas involved in storytelling—and those involved in risk taking and intense pleasure—show increased activation. 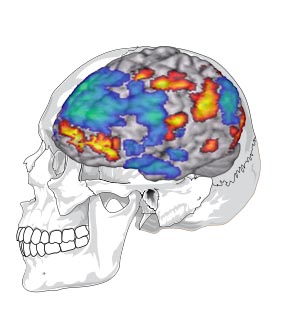 Therefore, jazz musicians lose inhibitions, jack up their creativity and greatly enjoy it all. This is something musicians and music lovers already knew except now we can actually translate these abstractions into scientific facts by visualizing where and how in the brain these happen. Figure 2 shows the areas of the brain that are quiescent (shades of blue) and those that are hyperactive (shades of orange and red) in the brain of a jazz musician during improvisation. The image has been superimposed on the drawing of a skull for orientation.

In conclusion, thanks to modern science, we now know exactly where music comes from and what happens while listening, playing and improvising. This knowledge does not, however, rob this unique art form of its mystique by reducing it to a number of nervous impulses; in fact, the more we unravel its complexity, the more beautiful and awe-inspiring it becomes.

Since we now know the how, maybe soon we will also discover the why, but until then we should all just slip a disc in the player, sit back and enjoy the ride.

The Art and Science of Jazz Hrayr Attarian United States