The Blessing: All Is Yes

By FREDERICK BERNAS
February 28, 2008
Sign in to view read count 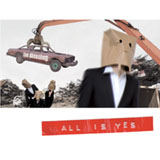 One of the most sideways-thinking groups on the vibrant UK jazz scene, The Blessing are rapidly expanding outwards from their Bristol home. Signed on a three-album deal to Candid Records, the band has just completed a successful UK tour to promote the first in the series, All Is Yes.

The title fits. It's evident that a cornucopia of musical influences permeates the quartet's mentality: collective sideman credits include names as diverse as Robert Plant, Roni Size, Portishead, the Super Furry Animals and countless jazz-related projects. Moods vary from the pleasantly atmospheric, Eastern-tinged grooves of "Loubia" to intense, driving, punky riffs in tunes such as "Bleach Cake" and "Thermos."

The latter track is one of the gems of the record, an ideal snapshot of its unpredictable and compelling nature. Clever saxophone and trumpet interplay (Jake McMurchie and Pete Judge, respectively) is framed flawlessly by Clive Deamer's ever-changing rhythms—including a hint of watered-down drum n' bass—and Jim Barr's catchy bass hook. "Cake Hole" displays rock sensibilities in the vein of fellow UK band Acoustic Ladyland, with shifts in tempo and temperament and a horn line that sways from punchy to peaceful. McMurchie's tenor sax produces an impassioned cry for attention on this track and throughout the disc; after all, The Blessing began life as an Ornette Coleman free jazz tribute, elements of which are plainly detectable.

"That Ain't It" features a freshly chaotic guitar cameo from Portishead's Adrian Utley, a long-time Blessing associate. His crunchy concoction of distorted screams, electronic fuzz and overdriven static provoke Judge and McMurchie into an improvisational frenzy as the track climaxes, but there is a reclusive sense of brilliant control and compositional rigidity at the same time. The group shares "a pathological distrust of chords," making Utley the perfect foil in this overflowing cauldron of experimental creativity.

All Is Yes looks like the tip of a new iceberg; this colorful compendium of unclassifiable, post-jazz fusion must be an early contender in album-of-the-year nominations. Individual virtuosity, combined with a wonderful communal understanding and spirit of exploration, gives The Blessing a unique position in any musical landscape. It is surely only a matter of time before the phenomenon goes global.