By Ollie Bivens
November 30, 2005
Sign in to view read count 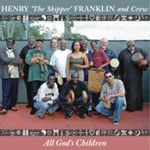 Los Angeles native son bassist Henry "The Skipper" Franklin is perhaps best known for his association with the albums released by the short-lived but influential Black Jazz record label out of Philadelphia in the '70s. He has also played with Freddie Hubbard, Archie Shepp, and the late Horace Tapscott. His new album on his own label is a continuation of a strand of jazz music that arose in the mid to late '60s.

Characterized by modal music (compositions and improvisations based on a series of modes, rather than chord progressions) with strong African and Islamic themes—underpinned by the newly emerging political sentiments of the black power/black nationalist movement—all the tunes on All God's Children are marked by a deep sense of spirituality. Percussion is dominant throughout as one tune blends into the next, breaking up the searching John Coltrane-like saxophone stylings of Michael Session and Zane Musa. The high-pitched singing and squeals of Talita Long on "Follow Your Bliss" especially, led off by an Islamic prayer, add a touch of the avant-garde to the mix. Franklin's bass provides the rock-solid support holding everything together.

Fans of the music of saxophonist Pharoah Sanders, Shepp, LA's Dwight Trible, and the latest percussion-heavy works of the Art Ensemble of Chicago will especially love this excellent album. Although All God's Children may be hard to find, the search will be well worth it. It's one of the best albums of 2005.