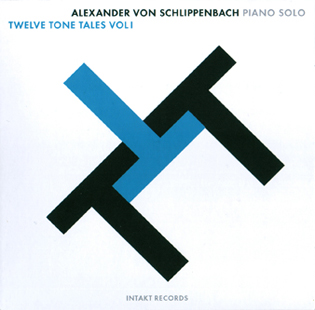 Pianist and composer Alexander Von Schlippenbach has staying power. Over the course of 40 years he has proven himself to be as fervently committed to the cause of free and near-free improvisation as anyone out there. As a key member of the Globe Unity Orchestra, he has explored the area within the context of a large ensemble; as a third of a trio with Evan Parker on saxophones and Paul Lovens on percussion, he has mapped out the territory within a small group setting, one that's never been anything other than stimulating.

In view of all that, what we have on Twelve Tone Tales Volumes 1 & 2 amounts to breaks with precedents, at least on record—Von Schlippenbach performs alone at the keyboard over the course of both discs, and the overall programme is studded with his own compositions and those of, amongst others, Eric Dolphy and Jerome Kern.

Anyone assuming this relatively restricted environment will prove counter-productive is going to be proved wrong however, as from the off it's apparent that Von Schlippenbach is using the opportunity to advertise aspects of his musical personality that haven't always been apparent in the past. On his own "Twelve Tone Tales Invention Paraphrase," which opens the first disc, it's at times as if his right hand has assumed a quiet life of its own, so indeterminate is the low-key lyricism of the piece.

That feeling is to the fore again on "K2," though here it's shot through with the kind of restlessness that disrupts the flow as much as it highlights other expansive vistas. That might sound like a negative point, but in Von Schlippenbach's hands it works in much the same way as pianist Paul Bley's apparent irresolution does. The notion of music as a perpetual work in progress is a slippery thing at the best of times, and for all the individuality of their approaches both men come across as acutely aware of how worthwhile that mental approach is. The point is made on "Only Thing Left" here, where there seems to exist a positive dilemma between Von Schlippenbach's hands which keeps the listener on the edge of the seat in the most positive way.

It's on the second disc that Von Schlippenbach gets more expansive in terms of the music covered, but it's still the opening "Twelve Tone Tales III" which gets the attention from the off. Again that air of edgy, slightly unnerving lyricism is present, and rendered all the more effective by the negligible physical means it takes to establish. In contrast with a lot of his earlier work on record there is a very different order of intensity at work here, as per "Born Potty," where the music seems to come only reluctantly, as if it was a body that needed coercion as opposed to something that was happening more identifiably in the moment.

Sequenced one after another as they are, the three Eric Dolphy compositions—"Les," "Something Sweet, Something Tender" and "Out There"—are a mini-program in themselves, especially as they highlight Von Schlippenbach's considerable gift as an interpreter, something that because of the nature of the music he performs has been anything but apparent on record in the past.

The longevity mentioned at the start of this review could feasibly have brought all sorts of things with it, but what's clear from both of these programs is that Von Schlippenbach could well be undergoing some kind of artistic rebirth. There was little wrong with his previous musical personality, which makes the development, if such it is, only more extraordinary.