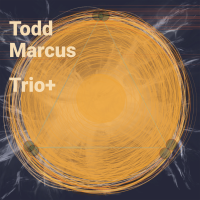 The bass clarinetist, composer and arranger Todd Marcus, who also works as a community activist in his adopted hometown of Baltimore, hasn’t been a laissez-faire sort of recording artist. Among Marcus’ previous efforts are 2006’s ambitious nonet outing, In Pursuit of the 9th Man, and 2015’s Blues for Tahrir, an orchestral exploration of both his Egyptian heritage and the concept of jazz as a force for social and political activism. Last year’s On These Streets (A Baltimore Story) celebrated the vibrant yet often maligned west Baltimore neighborhood where Marcus lives and works—an environment that was also home to Freddie Gray, the young African-American man who became an avatar for racial injustice after dying in police custody in 2015. In a profile focusing on that project, DownBeat commented, “When it comes to melding social consciousness with art, Todd Marcus walks the talk.” On Trio+, Marcus’ new album for Stricker Street Records, his craft is as incisive and passionate as ever, but in a freer and less directly conceptual way. Trio+ is instead Marcus’ effort to pare down his writing and arranging—a chance for him to dig into contained and concise tunes and forms with a stellar small group. “I wanted to do something that could offer a contrast to my previous material,” Marcus says. What’s more, he aims to create an open, no-frills context in which to further elevate his unlikely primary instrument, the bass clarinet. “Part of my mission has always been to show what I’ve been able to do with this instrument in a modern straight-ahead jazz context,” he says. “I want to show that the horn can be more than just an avant-garde, fringe instrument.” As always, Marcus keeps matchless company. In addition to bassists Ameen Saleem and Jeff Reed and drummer Eric Kennedy—some of the best and brightest current musicians nurtured on the Baltimore/D.C. scene—Trio+ features two of mainstream jazz’s absolute stalwarts: drummer Ralph Peterson and trumpeter Sean Jones. “Ralph is obviously a powerhouse,” Marcus chuckles, before praising the former young lion’s fluid blend of virtuosic intensity with tactful dynamic control. Jones relocated to Baltimore last year to direct the Peabody Institute’s jazz program, and has been a coup to the city’s thriving jazz scene. Every Tuesday as part of the Baltimore Jazz Collective, Marcus and Jones share the bandstand at the city’s posh new jazz hub, Keystone Korner. “Sean’s a wonderful musician,” Marcus says, “and just a great guy to be around—very positive.” For Marcus, the brassy timbre of Jones’ horn up against the rich, woody sound of the bass clarinet evokes some of his favorite frontlines in jazz history—especially his bass-clarinet hero Eric Dolphy alongside trumpet greats Booker Little and Freddie Hubbard. The centerpiece of the album, however, is a four-movement tour de force for trio, written by Marcus and entitled “Something Suite.” The composer names Sonny Rollins’ groundbreaking strolling-trio work “The Freedom Suite” as a primary inspiration, and it’s easy to hear Rollins’ adventurous yet accessibly melodic language in Marcus’ performance. On “Amy Pookie”—Marcus’ tribute to his wife—he, Jones, Saleem and Peterson tap into the Ornette Coleman Quartet’s cozy, blues-soaked energy. The Marcus original “Cantata” finds the leader on his first instrument, the B-flat clarinet, crafting lines of classically tinged orchestral beauty. Another original, “Plummeting,” demonstrates Marcus’ ability to write and improvise in a more demanding postbop vein, tinged by the hurly-burly freedoms of the avant-garde; a thrusting read of Bronisław Kaper’s “Invitation” enables Marcus to cover similarly virtuosic ground. Inspired interpretations of “My Foolish Heart” and “How Deep Is the Ocean” underscore Marcus’ tremendous gifts for melodic invention and rhythmic finesse. “Neophilia,” written by the bass-clarinet trailblazer Bennie Maupin, is a hypnotic, danceable riff of a tune, anchored here by both bassists and made explosive via Peterson’s drumming, at once steadfast and in constant roiling motion. At the center of all this continually engaging writing and improvising is the remarkable feat that Marcus has spent his career pursuing: his ability to combine the expressive facility of the saxophone with the earthy, singular tones of the bass clarinet. As he puts it in his new album’s liner notes, “For me and my identity, the bass clarinet is underrepresented in jazz.” Trio+ is a stunning argument for Marcus’ instrument, and his music.

All About Jazz musician pages are maintained by musicians, publicists and trusted members like you. Interested? Tell us why you would like to improve the Trio+ musician page.