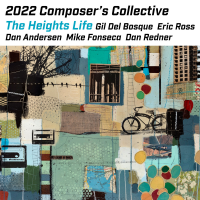 Most great music starts with some type of conceptual framework, an idea or a concept that inspires and guides the creative process, providing unity and cohesion to the larger work. Such is the case with this new recording from the 2022 Composer’s Collective. An accomplished group of Austin-based musicians form an ensemble that meets weekly to rehearse each other’s music, with the idea that each player brings a new piece each week. A simple concept, a practical concept, with a surprisingly complex and impractical outcome—an outstanding artistic statement forged by a group of composers who have seamlessly merged their many voices and stylistic penchants into a singular musical vision. These are all seasoned professionals who honed their craft in a city that has an incredibly vibrant (and very competitive) live music scene, and it shows in the incredibly strong musicianship heard throughout this recording. Thankfully, however, the musicians never forget the concept that started this project. The compositions take center stage and the musicians serve to further their common goal. It is that concept that holds sway on this remarkable project, and one can only hope that the Collective will have much more music to share as the concept grows and develops over the next five years as we approach 2022. Kurt Ellenberger Arts and Culture Blogger, Huffington Post

All About Jazz musician pages are maintained by musicians, publicists and trusted members like you. Interested? Tell us why you would like to improve the The Heights Life musician page.