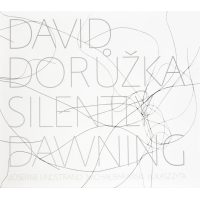 The Things That Never Can Come Back; November; The Heart Has Narrow Banks; Percussion Interlude; Noc a den; I Felt My Life; Tears; Before Spring Comes; Voice and Guitar Introduction; Forever Lost; Hope Is the Thing With Feathers; Pohadka

The guitarist David Dorůžka whose renown has long ago surpassed the borderlines of the Czech scene and whose debut album “Hidden Pahts” (2004) has been crowned with anumber of accolades, has released his second album. It is composed of his own pieces on the poetry of Emily Dickinson (in English), the Czech 20th-century poet Jiří Orten (in Czech) and on the lyrics of the Swedish singer Josefine Lindstrand (in Swedish) who joined Dorůžka in the studio and performs in all the three languages on the album. The accompaniment is provided by the Polish rhythmic duo Łukasz Żyta (drums and percussion) and Michał Barański (bass). The intimate and candid music in excellent performance and faultless sound received the “Anděl” Award for the best jazz album of 2008.

All About Jazz musician pages are maintained by musicians, publicists and trusted members like you. Interested? Tell us why you would like to improve the Silently Dawning musician page.