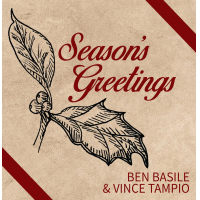 Up on the House Top; We Wish You A Merry Christmas; Go Tell it on the Mountain; Jingle Bells; What Child Is This?; O Holy Night; We Three Kings; O Come All Yee Faithful: Silent Night

An instrumental chamber jazz interpretation of select Holiday songs. The musical arrangements were inspired by Frank Sinatra, Vince Guaraldi, and Al Green. Season’s Greetings features hand selected Holiday favorites arranged and performed by Ben Basile and Vince Tampio; Tampio also served as producer and engineer. The two musicians have been collaborating since college. Album collaborations include Tampio’s The Nook (2018), Basile’s Two For Twenty (2016), and their A Duo Tribute to Frank Sinatra (2015). All tracks on Season’s Greetings were recorded at S.A.V. Studios, Philadelphia, PA.

All About Jazz musician pages are maintained by musicians, publicists and trusted members like you. Interested? Tell us why you would like to improve the Season's Greetings musician page.