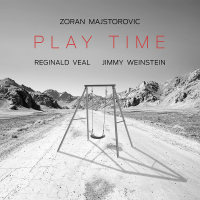 The traditional jazz guitar trio formation and the original music written by the bandmembers are two important characteristics of this album on which Croatian guitarist and composer Zoran Majstorovic joins the rhythm section made up by two great american musicians; Reginald Veal from New Orleans and Jimmy Weinstein from New York. In late 2016. after a ten day tour in Croatia, Slovenia and Italy they recorded eight compositions at the well known “Birdland” studio in Gorizia, Italy. Among the tunes there were four Zoran's originals, one Reginald's, one co-authorship between Reginald and Zoran, and two compositions by Jimmy Weinstein; ”Play Time” which is also the album title and ”Dear Max” which is Jimmy's personal hommage to his mentor Max Roach.

All About Jazz musician pages are maintained by musicians, publicists and trusted members like you. Interested? Tell us why you would like to improve the Play Time musician page.