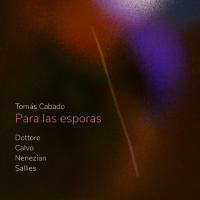 Tomás Cabado presents his second album as leader, inaugurating his participation in Isla Desierta's catalog. Para las esporas is a firm bet on composition and arrangement of original music in which a whole musical background converges: jazz, Brazilian music, songwriting, baroque and romantic music. Para las esporas traces a continuity with Tomas's previous work (A veces el faro, a veces el barco, a veces se encuentran, a bassless trio) by also proposing an unusual instrumentation: Tomás's guitar is joined by a trio of winds consisting of Jeanette Nenezian (trumpet), Cecilia Dottore (alto sax) and Manuel Calvo (trombone). In this sense, it advances in the disregard of a rhythmic section (without drums nor bass) to make room for the more chamber-like play, where the instrumental arrangements and colors, the interaction between musicians, the contrasts between stripped and loaded textures stand out. The sound of the album is completed by the expressive voice of Juana Sallies, in Música lejana and Vértigo, an arrangement of a song by Shaman Herrera and only cover of the album.

All About Jazz musician pages are maintained by musicians, publicists and trusted members like you. Interested? Tell us why you would like to improve the Para las Esporas musician page.